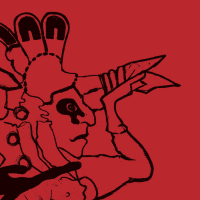 By anyone's standards, Àine O'Dwyer is a hyper-accomplished musician and innovator. As a pre-teen in her native Ireland she had already taken on the piano, harp, fiddle and flute. Eventually focusing her attention on the harp and piano, she developed an unquenchable inquisitiveness about the pipe organ—not the most accessible of instruments. In acts of quiet defiance, she began dropping in—unannounced—at St. Mark's Church in London to practice on their organ. The result of her personal recordings is the cult classic, Music for Church Cleaners Vol. I and II (Mie, 2015). Gegenschein is less a sequel to that album than a continued exploration of the possibilities of the instrument and the musician.

The album's title comes from an astronomical term describing a dim nighttime light believed to be the image of the sun reflected through particles in the atmosphere. In the two extended pieces on Gegenschein, O'Dwyer conveys a sense of wonder through her sonic interpretations the mythical theme of apocalypse. O'Dwyer recorded the pieces on December 12, 2012, a date that the ancient Mayans had predicted as the end of the world.

"A World Ending"—at nearly one half-hour—is a completely improvised, and self-contained suite, shimmering sprays of atmosphere and multi-layered hints of melody, all nicely tucked into an eerie drone. "12.12.12" also rises and falls on the dense exhaust of the organ, but here O'Dwyer adds distant vocals that feel anguished and foreboding. The spare music hesitates as if avoiding its (and our) inevitable demise.

O'Dwyer's choice of recording venues—churches and caves—says as much about her ear for natural effects as it does about her own personality. In an interview with the Irish Times she revealed that live audience response to her playing makes her feel awkward. Perhaps it breaks the trance that O'Dwyer seems to fall under when improvising in these solitary locations. If that's the case, Gegenschein benefits from keeping those audiences at bay.