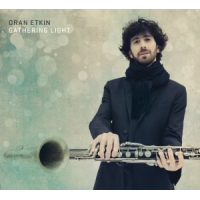 Multi-reedist Oran Etkin's first album—Kelenia (Motema Music, 2009)—fused Malian sounds and Jewish music with jazz. Its follow-up—Wake Up, Clarinet! (1-2-3-4 Go, 2010)—was geared toward kids. Now, for round three, Etkin has cast his net over a huge portion of the globe, pulling together, arranging, and morphing musical ideals he's encountered while touring through Asia, Israel, and portions of Europe.

Gathering Light is a gloriously global musical mélange that finds Etkin in good company, creating alternately gripping and grooving performances with the help of some of the most distinct personalities on the scene today. Ubiquitous guitarist Lionel Loueke, fluid-and-fierce drummer Nasheet Waits, stalwart bassist Ben Allison, and underrated-and-adventurous trombonist Curtis Fowlkes make for a compelling mix, burrowing deep into these pieces.

Etkin's bass clarinet work, which deserves the "beyond category" distinction, remains his calling card, but he also makes a case for his clarinet and tenor saxophone in a few places on this one; the former often comes off as chipper and bright ("Taxi Dance" and "Guangzhou Taxi"), and the latter speaks in measured and cryptic phrases ("Scattering Light" and "Distant Sounds Of Change").

Gathering Light is firm evidence that the world is Etkin's oyster, palette, and muse. This is global jazz done the right way.