By David Adler
February 7, 2009
Sign in to view read count 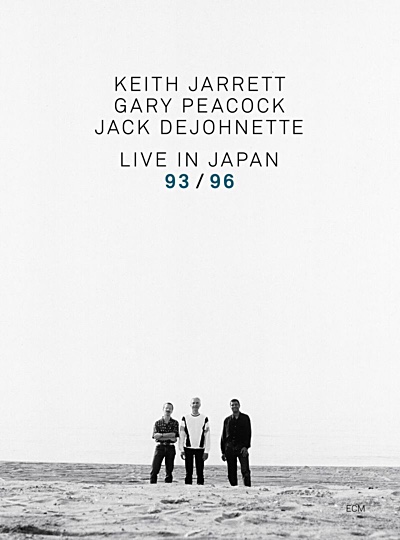 The bass is something like the spinal column of a jazz ensemble, where rhythm and harmony are made to cohere. For over 40 years, Gary Peacock has fulfilled the role with mastery, enmeshing himself in nearly every modality of modern jazz, in trios as dissimilar as Albert Ayler (Spiritual Unity) and Bill Evans (Trio 64). While he can point to a respectable archive as a leader and composer, he's spent the bulk of his time as a sideman, interpreting the music of famous and not-so-famous colleagues. Admirers of this complex figure can now sink their teeth into three piano trio recordings—Keith Jarrett's double-DVD Live in Japan 93/96, Bill Carrothers' Home Row and Lowell Davidson's Trio—to get a fuller sense of Peacock's aesthetic range and adaptability.

Obviously, Peacock's highest-profile gig is with Keith Jarrett and Jack DeJohnette in a trio that continues to parse the American Songbook. To Jarrett's already extensive trio catalogue, Live in Japan 93/96 adds a pair of '90s dates from Tokyo, the first of which is filmed outdoors and has more of an up-close-and-personal feel. The Peacock we encounter here is a fierce bebopper and sensitive ballad player—his melody feature on "Mona Lisa," from the '96 date, comes across like a classical piece, short and to the point. But we also hear Peacock as an expounder of funky straight-eighth vamps on "Caribbean Sky" and "Extension" (improvised codas to "Last Night When We Were Young" and "Solar," respectively). For all its focus on straight-ahead swing, Jarrett's trio is also quite the soul-jazz band, putting the grooviest spin on Ray Bryant's "Tonk" and venturing the dark original "The Cure," which could even be said to recall Jarrett's electric Miles period (imagine the tune played on Rhodes).

Peacock is as much if not more effective on Home Row, Bill Carrothers' long-shelved 1992 date with Bill Stewart on drums. Living off the grid on Michigan's Upper Peninsula, Carrothers is Jarrett's heir in some ways: an elegant, vehemently swinging pianist who composes but devotes serious time to standards, playing within tonal bounds yet leading off Home Row with a weirdly polyphonic gloss on Ornette Coleman's "When Will the Blues Leave." The sound is consistently rich and assertive and the woody, three-dimensional bass tone greatly helps. Peacock leaps from the speakers on the hard mid-tempo swing tunes, including Thelonious Monk's "Off Minor" and the original title track. He makes short work of the extremely difficult head to Carrothers' "A Squirrel's Tale." His patient, deeply felt single notes lend a haunted quality to the pianist's more meditative works "Hope Song" and "Ballad of Billy Milwaukee."

On Lowell Davidson's Trio, we hear Peacock in late July 1965, when Carrothers was one year old and Jarrett's breakthrough with Charles Lloyd was still a year away. In a mere two weeks, Peacock would enter the studio to record Spring, Tony Williams' second avant-garde album for Blue Note. Davidson, a trained biochemist, was subsequently injured in a lab accident and never recorded again. On his one and only outing, very much a product of those extraordinary times, he joins Peacock and drummer Milford Graves for five riveting pieces of post-tonal jazz totaling 44 minutes in length. There are echoes of Cecil Taylor in the dense and ceaseless movement of "'L'" and "Ad Hoc" (the latter featuring an unaccompanied bass solo). But "Stately 1" starts in a calmer rubato feel with a minor-key tinge, bringing Andrew Hill to mind. The sound is rewarding, although Peacock's is the least present instrument in the mix. Still, he cuts through the oddly placed intervals of "Dunce" and the acidic motifs of "Strong Tears," heightening the record's aura of mystery.

Tracks: DVD 1: Introduction; In Your Own Sweet Way; Butch And Butch; Basin Street Blues; Solar—Extension; If I Were A Bell; I Fall In Love Too Easily; Oleo; Bye Bye Blackbird; The Cure; I Thought About You. DVD 2: Introduction; It Could Happen To You; Never Let Me Go; Billie's Bounce; Summer Night; I'll Remember April; Mona Lisa; Autumn Leaves; Last Night When We Were Young—Caribbean Sky; John's Abbey; My Funny Valentine—Song; All The Things You Are; Tonk.

Tracks: When Will The Blues Leave; Jesus' Last Ballad; A Squirrel's Tale; Hope Song; My Heart Belongs To Daddy; Off Minor; Lost In The Stars; Home Row; Ballad Of Billy Milwaukee.