BY DAN MCCLENAGHAN
February 20, 2019
Sign in to view read count 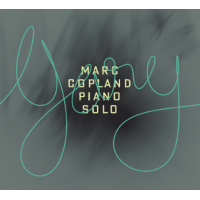 Pianist Marc Copland is the perfect interpreter of the music of bassist Gary Peacock. The artists' musical relationship began over three decades ago, and continues to this day. Peacock, best known perhaps for his long tenure in pianist Keith Jarrett's "Standards Trio," has played on numerous Copland recordings, including At Night (Sunnyside, 1992), Softly (Savoy Jazz, 1997), two out of the three of Copland's profile-boosting "New York Trio Recordings" on Pirouet Records, Modina ( 2006) and Voices (2007), and when Peacock launched his own trio it was Copland who was chosen for the piano chair, on Now This (2015) and Tangents (2017), both on ECM Records.

Given the history, Gary, a set of Copland's solo piano interpretations of seven of Peacock's distinctive compositions, makes perfect sense. So does the inclusion of the title tune, written by Peacock's one time wife and musical collaborator, Annette Peacock.

With some notable exceptions, Peacock's compositions lean to the abstract side, with a simplicity and clarity of purpose. They also tend to shine with a reflective light, glowing with a simple yet cerebral dynamic and magical luminescence. Copland leads these tunes into a somber territory, beginning with a funereal take on Peacock's "Voice From The Past" from one of the bassist's early ECM outings. Annette Peacock's "Gary" follows this, with Copland creating a sound that is every bit as solemn as the opener's.

"Gaia," that opened Peacock's Now This album, is infused with a sense of the unknown. Copland makes it even lovelier here. Few pianists have the handle on harmonic complexity that Copland possesses, and his acumen in that component is in full display throughout the entire set. His judicious use of space also plays a part, especially on "Moor," another early Peacock tune.

This is as deeply beautiful a set as Copland has recorded—with his supple touch on full display, creating shimmering, delicate chords and melodies untouched by gravity—but it is also largely a "grey" sound, contemplative, inward, even gloomy at times—music under a sky of low, dark clouds, closing with one of Peacock's most most recognisable and distinctive melodies, "Vignette." It stops on a dime, leaving us wondering.