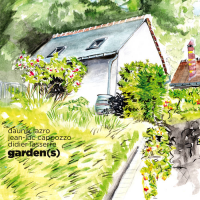 This progressive French trio features musicians who have respectively been at the forefront of Euro improvisational circles, partaking in numerous small and large ensemble formats. The synergy and inventive concepts many of us would anticipate is wholly inherent here, as the band covers Duke Ellington, Albert Ayler and John Coltrane bordering three group composed pieces "Garden(s) 1 through 3" and trumpeter Jean-Luc Cappozzo's "Joy Spirit."

Cappozzo brings Ellington's "Sophisticated Lady" to the wild side via an opening duet with drummer Didier Lasserre by spinning an asymmetrically melodic and brash rendition, as saxophonist Daunik Lazro chimes in during the bridge section. Steely, coarse and free-form counterpoint ensues as the musicians also paint a broadly colored portraiture while not forsaking the main theme. Hence, the trio is resourceful and doesn't simply embark upon a traditional trajectory. It's meaningful and cohesive improv, gushing with softly woven and bold textures, along with frisky exchanges and periods of minimalism, tempered with ethereal extracts.

Coltrane's "Lonnie's Lament" is accentuated by Lazro who quietly sings the familiar melody through his sax, shaded by the Lasserre's cymbal hits, and followed by Cappozzo's mellow-toned lines, segueing into a rumbling movement that soars into overdrive. However, "Garden 2" is a brief microtonal interlude that preps you for the trio's rendition of Ayler's "Angela," where the musicians hunker down within a bluesy gait amid the hornists' chirpy accents. Here, Lazro's bellowing bari sax phrasings spark an entrance into a full-blown blitz, as all hell breaks loose which is perhaps appropriate for most Ayler covers. It's a fine outing that triumphantly parlays the artists' freedom of movement and cunning tactics while not abandoning structure for the sake of it.