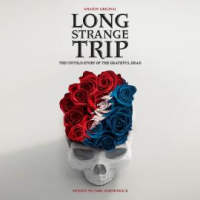 At a glance, there's appears a dearth of rarities on the three compact disc version of the soundtrack to Amir Bar-Lev's documentary of the Grateful Dead Long Strange Trip. But a closer look reveals the approximate playing time of the seven previously unissued tracks is approximately seventy-four minutes in total, practically full-length playing time for a CD. And, not surprisingly, given the expanse of footage in The Untold Story of the Grateful Dead, the range of material is as varied as the locales from which it comes.

A patient but purposeful version of "Dark Star," proceeding from the atmospherics of feedback to a well-defined melodic and rhythmic motif -the total of which runs just shy of twenty-four minutes -emanates from the Fillmore East in February of 1970. It's followed in fairly close succession on the initial disc with a coupling of tunes from June the next year that would eventually become one of the Dead's most enduring couplings, "China Cat Sunflower"/"I Know You Rider."

By this time, the group was functioning snappily with Bill Kreutzmann as the sole drummer and with Keith Godchaux in tow, the latter's piano functioning as delicious foil for Jerry Garcia's guitar. Likewise comfortably ensconced in the lineup nearly two decades later, keyboardist/vocalist/composer Brent Mydland leads a segue from Traffic's "Dear Mr. Fantasy" into The Beatles' "Hey Jude:" this pairing of covers highlights what an inspiring addition he was to the lineup in the ten years-plus he was a member (he passed away under tragic circumstances in 1990).

The two cuts that conclude this triple set soften the stark take on the titular leader of the Grateful Dead which concludes this four-hour film. The profoundly self-aware balladry that is "Stella Blue" finds its match in the similarly subdued, discerning reflection of "Days Between;" one of Garcia's greatest collaborations with long time songwriting partner, lyricist Robert Hunter, this number derives from their last burst of shared creativity. Because it was never recorded in the studio by the group, its inclusion here is appropriate, all the more so as it comes from a 1994 show at of the Dead's favorite venues, Madison Square Garden, less than a year before the legendary musician's demise; the resignation in his voice is as poignant as that in his precise guitar work, while the rest of the group maintains a stately gait, almost as if to steady their falling hero.

All these previously unreleased recordings are spread across the compact discs in the Amazon-exclusive package, which makes it somewhat clunky to program and play them in sequence in a single sitting. But this sequencing does lend itself to hearing the tracks in the context of the remaining selections that (again) present a cross-section of the recorded oeuvre of the Grateful Dead. Yet as with most such releases, the most recent of which was the double set Best of (Rhino, 2015), novice fans to whom the movie is primarily aimed now have ready access to a broad spectrum of music from a quarter century of the iconic band's career.

The range of selections, including a good share of studio work in the form of "Candyman" from the stellar American BeautyIn The Dark (Arista, 1987), is all appropriately annotated, just one more selling point for a package that transcends its pure commercial value.