By GLENN ASTARITA
March 6, 2014
Sign in to view read count 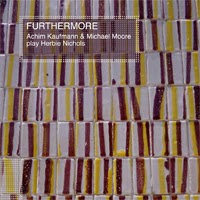 Award-winning alto saxophonist, clarinetist, Michael Moore has performed on seminal modern and avant-garde jazz albums, spanning several decades via numerous projects and stints that include Clusone, The ICP Orchestra, bands led by drummer Gerry Hemingway and bassist Mark Helias; the list goes on. He's a California native who has resided in Holland since 1982 and is cited for his involvement with cutting-edge entities throughout Europe. Furthermore is one of three releases with highly regarded German pianist Achim Kaufmann, also including Something Nothing (Ramboy, 2014) and Nothing Something (Ramboy, 2014). However, on Furthermore, the duo covers the often under-appreciated catalog of jazz pianist Herbie Nichols, who only released a handful of albums before his untimely passing in 1963.

Perhaps a little more on the modern mainstream schema than the other concurrent releases, Moore's signature, wistful and velvety sound amid his buoyant alignment with Kaufmann add a sheen to the largely oscillating grooves. The duo engages in complementing and contrasting frameworks while generating nimble accents throughout the program. They create a positive vibe, injecting buoyancy and moments of lament.

On "Wildflower," Moore's alto lines intersperse a fluffy, deep-blues outline into the mix with Kaufmann's rolling chord clusters and their spunky call and response movements. Yet the pianist launches "Double Exposure" with asymmetrical voicings and plush harmonies, along with Moore's gusty flurries. And "Change of Season" evolves as a seductive ballad, spiced with the artists' softly rendered tonalities. Here, Kaufmann quietly builds some steam by methodically gravitating to the upper registers.

Other than one Kaufmann original, "The Yellow Violet" was composed by pianist Andrew Hill and is devised on a staggered flow with reverberating choruses, yet is sublime, and features Moore's lighter-than-air and, at times, raspy mode of attack. No doubt about it, the musicians communicate a fruitful relationship, often shaded with ethereal overtones and a host of mood-evoking propositions.