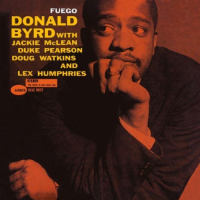 The role played by Donald Byrd in the development of hard bop is often unfairly overlooked these days—as if the trumpeter's '70s forays into more commercial territory justifies expunging his earlier contributions from its history. Fuego, Byrd's third date for Blue Note, finds him at his very best, in the familiar company of altoist Jackie McLean, pianist Duke Pearson, bassist Doug Watkins and drummer Lex Humphries. Recorded in October 1959, the record reflects the contemporaneous influences of two of Byrd's earlier employers: Art Blakey and John Coltrane. The six Byrd compositions understandably lean primarily toward the former, Blue Note being the house that Blakey built, but the modal improvisations on some of the tracks forecast the growing importance of Trane's lessons.

The opening title track could easily be mistaken for a Messengers outing from the band's Free For All period; Humphries' powerful interjections playing an integral part in the song's structure. Byrd's solo, referencing "Love For Sale and executed over Watkins' walking bass and Pearson's spare piano accompaniment, clearly demonstrates the sway Miles held over the leader's conception. McLean's strident searing alto, one of the most original sounds in jazz, is steeped in the urgency of the times.

"Bup A Loup begins in classic fiery bebop form (Pearson even quotes the Gillespie line named for the idiom) and ends with the band marching out to Humphries' staccato martial rhythm. "Funky Mama is a slow twelve-bar blues initiated by Watkins, with impressive turns taken by Pearson, McLean and finally Byrd, each of whom contribute solos that are sublime for their simplicity and profound emotional depth.

Byrd's "Low Life is a cleverly constructed composition combining elements of Benny Golson's "Blues March and Bobby Timmons' "Dat Dere, a musically successful attempt to capitalize on the huge popularity of the two Jazz Messengers jukebox hits. "Lament, not to be confused with the JJ Johnson classic, is another forward-looking piece by Byrd (perhaps the most masterful of the date), with an exotic mood that is reminiscent of the work of a fellow Detroit native, Yusef Lateef.

The closing "Amen is a jubilant gospel-tinged romp with a rousing rhythm and some surprising harmonic twists. Blue Note dates from this period could often be formulaic in their attempts to duplicate the commercial achievement of earlier records. In many ways Fuego follows the label's formula, but the real success of the date flows from Byrd's considerable compositional skills and the substantial talents of the artists playing his music.