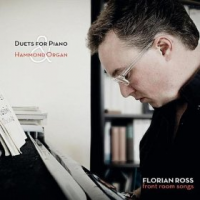 The use of overdubs isn't really the norm on jazz recordings, but it is an accepted practice. Very often it can simply involve a horn player adding a line here or there, providing some finishing touches to music that was mostly-done already, but every now and then it goes well beyond that point. Piano legend Bill Evans, for example, charted a new course when he delivered Conversations With Myself (Verve, 1963), which featured Evans atop Evans on record.

That particular recording, while turning plenty of heads, can hardly be said to have started a trend in jazz, but it did open the door for others to try their hand(s) at the art of singular duets; now, four decades later, pianist Florian Ross walks right through that door with Front Room Songs.

Ross, a German pianist who's worked and/or recorded in virtually every type of setting from solo piano to big band, delivers a program of organ and piano duets that's at once unique and wholly comfortable in a familiar way. Part of the success of this project has to do with Ross' clever blending of familiar tunes ("Alice In Wonderland" and "I Should Care") with highly accessible originals ("Daffodil"), and part of the success is due to the fact that he doesn't forsake the idea of a rhythm section just because all of the instrumental elements aren't present; Ross is a rhythm section unto himself, creating organ bass lines that provide propulsion and highlighting the rhythmic underpinnings that naturally exist within the music.

The first three tracks on the album each hint at this essential rhythmic quality in different fashion: "Alice In Wonderland," one of several waltzes on the album, bounds along in natural fashion; "Daffodil" alludes to a bossa beat without actually containing one; and a faster-than-usual "Blackbird" works off of a metronomic click that Ross toys with and plays around. Steady time persists throughout the majority of the album, as one Ross backs the other for a head, solo or sideways glance, but it isn't omnipresent; "I Love Music," for example, breaths a bit more as the flow comes and goes, "Meditation In D" is a jazz-meets-new age hymn that never feels boxed in, and "Der Monde Ist Aufgegangen," the album-ending piano feature, oozes emotion in gentle waves.

While some might look at Front Room Songs as a gimmick-y type of recording, it's not. The notion of self-performed duets actually fades away as the recording unfolds, leaving the ears to simply admire a marriage of organ and piano that just happens to have been made by a single being.

Alice In Wonderland; Daffodil; Blackbird; Jennifer; I Love Music; I SHould Care; Let's Play A Bit; Everybody's Song But My Own; Meditation In D; Porridge Experience; Der Mond Ist Aufgegangen.