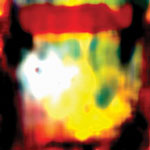 Tigersmilk's second release, while not conciously trying to do so, could make free improv fans out of even the most metronome-needy listeners. Having said that, let me add a note of caution: smooth jazz fans should run as fast as they can from this music.

Disclaimer stated, the next challenge for improvised music is to get beyond the visual. Listeners want and need to see what performers are doing on stage. Malachi Ritcher's recording of this live set at Chicago's Empty Bottle accomplishes this goal nicely, replacing the visual with the sensual: the almost tactile replication of the bass drum's boom, the cornet tripping and skittering, or Roebke plucking a bass line.

Tigersmilk's improvisation is purposeful and coherent, evidence that this session was recorded at the end of a tour. These three players certainly have developed a comfort level and rapport. For the lack of a better title, "15:53 finds Mazurek blurting out a Don Cherry-flavored march with van der Schyff cueing a bit of Blackwell. Things evolve into some echo fueled by Mazurek's laptop before some ambient leanings. How's that for a history of jazz since 1960?

While this music can have many meanings to different listeners, it doesn't fail to extend a welcoming invitation to interpretation.