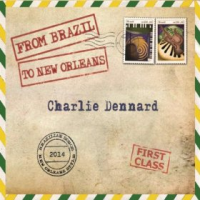 Thousands of miles separate Brazil and New Orleans, but pianist/composer Charlie Dennard thinks these two locales are a lot closer than that. This album is his way of showing that.

Dennard, a former student of Ellis Marsalis who's served as a music director for Cirque du Soleil productions and shared the stage with drummer Stanton Moore, trumpeter Kermit Ruffins and numerous other NOLA heavies, uses a rotating cast of twenty musicians to put life into this line of thinking. While the aim of this project may have been to highlight the parallels between these places and merge the musical language(s) connected to each, the end result isn't so simple and tidy. Dennard doesn't just stick with Brazil and New Orleans; his music goes all over the map.

"Itape," the album's opening track, is a Brazilian- flavored fusion number. The follow-up—"Capoeira Mata Um"—is both swaggering and swampy. Dennard writes for an expanded instrumental line-up here, as everything from bass clarinet to guitar to flute to melodica makes an appearance, and all of it fits together perfectly. This song speaks to both of the titular cultures, proving to be the truest musical manifestation of the Brazil-meets-New Orleans ideal that the album has to offer. "Abrindo A Porta" is a refined offering that shines a spotlight on Steve Masakowski's guitar work; "Asa Branca" exists in the space where New Age music meets the southern breeze; and "Quando O Galo Cantar" speaks to New Orleans' love affair with brass bands and party atmospheres.

As the second half of the album unfolds, Dennard strips everything away. "Senhorinha" finds him behind a piano, working the simple-and-pretty angle with cellist Jack Craft. The soulful "Valsa Luisiana" and hard-grooving "Africa Mae" follow, but Dennard takes a turn in a vastly different direction on the album-ending "Ganga Zumbi." His Cirque du Soleil experiences inform this Afro-Brazilian dream. Synthesizers, programmed sounds, piano, guitar, and various other instruments move beneath Tatiana Parra's warm vocals at various times.

From Brazil to New Orleans pulls from both places but it doesn't draw a straight line between the two. Dennard's tastes are too many and varied for him to follow such a simple and direct path.