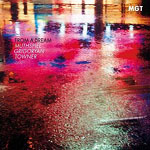 For over a decade now—at least on record—guitarist/pianist Ralph Towner has worked exclusively in two contexts: solo guitar albums under his own name for ECM, including Time Line (2006), and collaboratively with his longstanding group Oregon, last heard on 1000 Kilometers (Cam Jazz, 2007). Though never less than satisfied, many of his fans have hoped he'd participate in other contexts, as he's a flexible player who brings his distinctive harmonic approach to any setting, while adapting with ease to whatever challenges might arise.

From a Dream is the answer to that wish: a trio album with Austrian guitarist Wolfgang Muthspiel—a leader in his own right, heard recently on his 4tet disc Earth Mountain and his duet outing with drummer Brian Blade, Friendly Travelers Live, both released in 2008 on the guitarist's Material Records label. Kazakhstan-born Slava Grigoryan rounds out MGT, the group's wildcard as the Australian-based classical guitarist is the least-known of the three outside classical circles, where he's garnered considerable acclaim.

Given Towner's status as a composer, From a Dream is, not surprisingly, weighted heavily towards his writing, but also includes three Muthspiel tunes as well as Miles Davis' often-recorded "Nardis." Towner's material dates back to his enduring "Icarus" and tranquil "Beneath an Evening Sky," through the change-heavy "Hand in Hand" to more modern fare including the propulsively contrapuntal "Tammuriata," first heard on Oregon's Prime (Cam Jazz, 2005), and 1000 Kilometers' pastoral "From a Dream." The majestically optimistic "In Stride" is Towner's only new contribution, but the arrangement of the three guitarists gives even the most familiar material a fresh facelift.

Towner's resonant 12-string defines "Beneath an Evening Sky," but Muthspiel's echo-laden chordal swells on electric that, later, lead to a harmonized bass line, provide a broader soundscape, with Grigoryan playing the singable melody on classical guitar. The liner notes indicate who plays what and in which channel, but those familiar with Towner and Muthspiel will easily be able to pick them out, leaving Grigoryan identifiable by elimination. He may live in primarily in the classical world, but Grigoryan proves, on track like "Beneath," that he's equally capable of lyrical improvisation.

But it's the trio tracks that truly demonstrate what this group can do. Muthspiel's elegant "Eos" mixes electric, classical and baritone guitars for a texture-rich and, at times, deeply dramatic piece, while "Icarus" retains its folksy vibe, providing plenty of solo space for all.

Despite Towner's compositional dominance, MGT is clearly a democratic trio, with From a Dream an outstanding debut that will hopefully be more than a one-off affair.