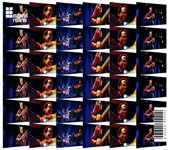 Like fellow guitarist Pat Metheny—whose extreme technical virtuosity he shares, and to whose cascading lyricism he adds an enjoyable astringency—Muthspiel enjoys playing in a variety contexts, more than a few of them reliant on stacked loops and worryingly close to ambient soundscapes. But like the older American player, when he's on-song he's magical, and Friendly Travelers and Bright Side are amongst his best own-name albums. Add Blade—a young master who's worked with a host of jazz and rock luminaries including pianist Herbie Hancock, saxophonist Wayne Shorter and guitarist/poet Bob Dylan, and whose Fellowship Band has included guitarists Kurt Rosenwinkel and Daniel Lanois—and expectations are high.

They're met in full. Friendly Travelers Live not only captures Muthspiel and Blade in some formidable part-arranged, part-improvised musical dialogues—from the post-rock rawness of "Heavy Song" through the delicate balladry of "Shanghai," with flavors of Senegalese mbalax and baroque court music along the way—the DVD also provides an illuminating portrait of the relationship between the two men. Onstage it's the relatively deadpan and absorbed Muthspiel who leads (he wrote all the tunes), and Blade who, well, not so much follows as floats around, above and below Muthspiel's guitar lines, simultaneously in the groove and beyond it. Offstage—the DVD ends with a twenty-minute film of the duo in conversation about the music during a train journey through Austria—Blade's conceptual influence is more apparent.

Real-time guitar loops are a feature of Friendly Travelers Live, just as they are on the studio album, but watching Muthspiel in performance reveals that many of what the mind imagines to be samples are in fact live and digitally unmediated—without the evidence of the DVD it doesn't seem possible that two hands, alone and unaided, could create such a layered sound tapestry.

Blade's playing is wholly in-the-moment, but it too is extraordinarily rich and layered. Of the three or four cameras used for the simply but effectively directed DVD, one points down from directly above Blade, who becomes a one-man Busby Berkeley dance troupe, his hands moving over the tom toms and low-slung cymbals in a manner as visually poetic as it is aurally so. Another camera catches his expressions of delight as Muthspiel lobs yet another nugget in his direction.

Visit Wolfgang Muthspiel and Brian Blade on the web.