By Walter Kolosky
November 18, 2002
Sign in to view read count 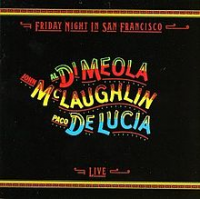 It was a historic occasion. The appearance of John McLaughlin, Al DiMeola, and Paco DeLucia at San Francisco's Warfield Theatre one Friday night in 1981 was a musical event that could be compared to the Benny Goodman Band's performance at Carnegie Hall in 1938. The Guitar Trio did for the acoustic guitar what Goodman had done for jazz. The acoustic guitar had gone commercial.

In 1979 and 1980, McLaughlin and de Lucia had actually toured Europe with Larry Coryell. McLaughlin tried to release a recording of this group but Columbia would have none of it, claiming Coryell was not a big enough name. Coryell had some personal problems at the time that did not help either. (The video Meeting of the Spirits features this version of the Trio, and it also appears on one cut on DeLucia's album Castro Marin ). When the time came to tour America, DiMeola stepped in. His presence suddenly made the Trio commercial. At any rate, Friday Night in San Francisco was the result.

FNSF truly caught these players' energy, amazing technique and humor to a generous degree. There is no doubt that McLaughlin is the leader (center channel gives that away), but DiMeola and DeLucia more than hold their own. DiMeola, though one of the world's greatest guitar players, lacks the emotional intensity and overall musicality to match McLaughlin or DeLucia. But the Latin influenced music of the Trio allows him to excel in a genre in which he had long dabbled. Not being a jazz player, DeLucia's improvisational work is understandably weaker than the other two. However, the music is as much in DeLucia's bag as anyone’s. The concert is full of call and response, unison playing, heavy chords (courtesy of McLaughlin), and audience screams.

The album's highlight is McLaughlin's duet with DeLucia on an Egberto Gismonti piece, "Frevo Rasgado". The beautiful melody and stunning improvisation leads to an absolutely hair-raising finale duel. (Gismonti has recorded a beautiful version of his tune on piano.) The recording's lightest moments occur during a hilarious duet version of Chick Corea’s “Short Tales of the Black Forest,” featuring McLaughin and DiMeola in which the two masters quote back and forth from various sources including Mancini’s “Pink Panther.” All three players finish the event with a studio version of McLaughlin’s “Guardian Angel.”

Friday Night in San Francisco may be considered the most influential of all live acoustic guitar albums. Though some have criticized it for its muscular tendencies, the recording certainly captures the excitement of the event itself. In a world of electric guitars, it was quite unusual to hear a crowd go absolutely ballistic over acoustic strumming. It is not so unusual today, and this record is one major reason for that.