BY GLENN ASTARITA
December 23, 2007
Sign in to view read count 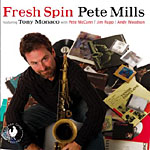 Tenor saxophonist Pete Mills doesn't chart new musical frontiers on this 2007 release. On the contrary, he just gets it done the good old fashion way via lots of gusto, oomph and up-tempo grooves, performed with his estimable band-mates. Mills regenerates the jazz organ combo vibe here, complete with soul/funk, swing and meaty underpinnings provided by the rock solid and fluidly moving rhythmic unit.

With Hammond B-3 ace Tony Monaco and guitarist Pete McCann onboard, the musical climate here is loaded with zestful motifs amid the soloists alternating exchanges. On "Eddie, Monaco embarks upon a vengeful tear by slamming his organ into overdrive. And in other spots, the musicians comp, dart and weaver around each other's often-torrid dialogues that tend to project a multi-layered and harmonious group-centric vibe.

"Crooked Cheese is a quirky funk romp, where Mills' edgy sax lines nicely contrast Monaco's silvery chord progressions. Nonetheless, the musicians mix it all up rather vibrantly. No doubt, a good time was had by all. And check out Mills' warmly penetrating choruses on the quiet duet with McCann on Billy Strayhorn's "A Flower is a Lovesome Thing.

In sum, the ensemble merges the best of many conceivable worlds. Chops-heavy, yet compositionally sound and focused, the artists' jovial camaraderie transcends the norm. Brimming with the essence of good cheer, Mills and crew communicate a distinct sense of musical merriment during the entirety of this impacting and irrefutably entertaining jaunt.

Straight Up; Eddie; Fossil; Too Close to Call; Schlooze; Diggin' on Dexter; Crooked Cheese; Talkin' with the Tubs; Winter Rain; For a Beginning; A Flower is a Lovesome Thing.