BY JOHN KELMAN
December 4, 2011
Sign in to view read count 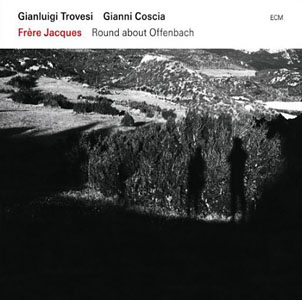 Once again, more than half a decade has gone by since clarinetist GIanluigi Trovesi and accordionist Gianni Coscia last recorded. Round About Weill (ECM, 2005) represented a shift away from the broader compositional purview of In cerca di cibo (ECM, 2000), instead focusing more monolithically—albeit with the improvisational élan which has defined this partnership from its inception still intact—on misunderstood 20th century composer Kurt Weill. With Frère Jacques: Round About Offenbach , the Italian duo with one octogenarian (Coscia) and one near-septuagenarian (Trovesi) tackles the music of Jacques Offenbach, with a similar modus operandi: interpret the 19th century Cologne-born/French composer's music with a playful combination of respect and irreverence, while creating spontaneous improvisations and collaborative compositions that act as causative links.

If "the same modus operandi" suggests predictability, however, there's no cause for concern. Frère Jacques: Round About Offenbach is a 75-minute set of nineteen pieces, ranging from eighty seconds to seven-and-a-half minutes, where some of the music may be so iconic as to be part of a Jungian collective unconscious, but breathed into new life with the combination of two wind-driven reed instruments that may possess distinct qualities but, at times, conjoin to create a most singular voice.

If Trovesi and Coscia demonstrate plenty of the endemic mischief of their Italian upbringing, it's never at the expense of unadorned beauty. "Dedicated to Hélène and her little birds" may begin fervently, with Coscia's accordion in clear support of Trovesi, whose soaring clarinet and occasional flittering motifs evoke clear images of the titular fowl, but halfway through the mood turns more melancholic, as Coscia's minor-keyed musings encourage Trovesi to simplify, even as the two gradually begin to orbit around each other with the kind of keen intuition that only comes from years of working together.

The duo adapts some of Offenbach's better-known works, such as pieces from his unfinished opera Les Contes d'Hoffmann (Tales of Hoffman), and La Belle Hélène, from which three pieces are drawn, in addition to the original "Dedicated to Hélène." And if Offenbach's "Galop," from Orpheus in the Underworld, isn't given full credit, the familiar dance song of the can-can certainly forms the foundation for "Galop...trotterllando," a Trovesi/Coscia original which possesses everything that make this duo so accessible yet so unfailingly deep—most importantly, an unfettered interpretive spontaneity that causes scored music to leap off the written page.

If Round About Weill's reference to the traditional French round "Frère Jacques" was a less-than-obvious hint at what was to come four years later, when Trovesi and Coscia recorded Frère Jacques: Round About Offenbach at Perugia, Italy's Centro Civico Musicale Sant'Anna, who knows what foreshadowing exists here? The only certainty is a hope that another half decade doesn't have to pass before Trovesi and Coscia reunite for another set that combines freewheeling and infectious joie de vivre with an equally unmistakable love of the music from which they choose to draw their inspiration—whatever the source.

Visit Gianluigi Trovesi and Gianni Coscia on the web.