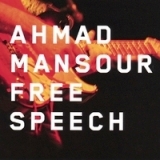 Iranian-American Ahmad Mansour has been stirring things as a modern jazz guitarist bent towards the edgier side. With heavy does of rock, jam-band and an attitude that shakes it all up, Free Speech is an introduction to his music in a live setting.

Recorded in Europe in 2006, the recording finds Mansour in a power trio with longtime associates, bassist Stomu Takeishi and drummer Ted Poor, both dynamic musicians who have recorded with jazz artists including trumpeter Cuong Vu's Vu-Tet, ArtistShare (2008) group.

The Mansour gig finds the trio bringing the crowd some free-spirited progressive rock, opening with the title track, which includes a funky vamp that builds in intensity. They take their time and work the groove, Mansour interjecting funky riffs, and subtle sound effects, later escalating into some freeform jamming and a psychedelic crescendo.

One criticism is that Takeishi and Poor aren't given more isolated solo time. But all might be forgiven when listening to the piece de resistance, "Nebula, where Takeishi lays down a sweet/funky bass loop that allows Mansour and Poor to stretch out with their own creative ideas. Things slow down on the mellifluous "Rule and Divide and close with the hard-hitting "Out on a Limb as Mansour's Strat grinds, Takeishi's fretless bass thumps and Poor provides the nasty back-beat. Who says jazz musicians can't rock? Apparently, Ahmad Mansour didn't get that memo.

Free Speech; Happenstance; Modulator; Nebula; Rule and Divide; Out on a Limb.