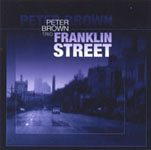 In a time where innovation is too often measured by complexity and abstrusity, there are still those who value the resonance of a good melody and the selfless approach of an ensemble for whom song is the priority. That's not to say that Ottawa, Canada's Peter Brown isn't a fine enough pianist/vocalist, or that his trio featuring drummer/producer Bruce Wittet and bassist Chris Breitner hasn't got the ability to tackle a couple of well-heeled standards on the largely original Franklin Street. But in many ways, Brown's album ought to be assessed as more than a jazz record. Instead, it would be better thought of as the work of a singer/songwriter who leans towards the language of jazz but is not entirely defined by it.

The opening "Atmos" is a case in point. Reminiscent of Aussie pianist Mike Nock's more atmospheric classicism, it's a dark-hued but beautiful duet in three movements for drums and piano, with Wittet's cymbals providing washes of color akin to the work of Norway's Jon Christensen on Ketil Bjornstad's The Sea (ECM, 1995). With a similarly nuanced approach, Brown's playing is a less melodramatic and more introspective alternative to Bjornstad's greater expansiveness.

Working in miniature—only Charles Lloyd's "Forest Flower" surpasses the six minute mark—Brown's solo approach works each song's melody and its myriad possibilities rather than demonstrating formidable chops. Wittet has always been a player deeply attuned to a song's essence, and here he combines a relaxed but often-times unconventional approach to swing with the kind of flexible responsiveness indicative of a player with ears wide open. Breitner is a like-minded player, more often than not an anchor, but on his rare solos demonstrating a similar respect for the core of the song.

But it's Brown's vocal tunes that reveal the most about the pianist. With a warm, mid-range voice that never resorts to excess, he remains expressive, most notably on the blues-centric "House of Franklin Street," with a groove more suited to a Ry Cooder album than a jazz piano trio disc, and Wittet's relaxed backbeat and guest guitarist Wayne Eagles' textural additions creating a more lush aural landscape. Brown's words are direct and to the point, lacking the dry wit of a Randy Newman but possessing an innocent simplicity that renders the meaning of the romantic "Choices We Made," poignant "Never Fall For a Broken Heart," and enviro-friendly "How the Other Half Lives" crystal clear.

Brown ends the album with the solo miniature "Small Things of Beauty," which acts as a perfect bookend to "Atmos." It's a spare and beautiful way to close an album that's as unassuming as it gets. Franklin Street may not surprise those looking for the next "great" pianist, but it's an album filled with ego-less playing and simple yet substantive songs that prove there's plenty of compelling music being made below the radar, and often in the most unexpected of places.

Atmos; Forest Flower; The House on Franklin Street; Spanish Lesley; Jitterbug Waltz; Choices We Made; Never Fall For a Broken Heart; Thelonius; How the Other Half Lives; Small Things of Beauty.