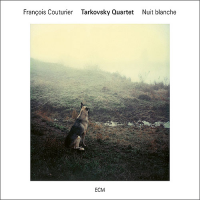 With Nuit Blanche, Couturier's trilogy becomes a quadrilogy, as his quartet expands its horizons even farther than ever before on an album that explores ambiguous nether-regions of time, space and consciousness. Being from a group that may not record or perform together as often as they (or their fans) might like, there are other projects that keep the internal chemistry growing...and in contexts that, as different as they are, provide grist for alternative explorations when everyone comes together as Tarkovsky Quartet.

Beyond Lechner and Couturier's Moderato Cantibile, the pianist and accordionist Matinier have been members of label mate Anouar Brahem's trio responsible for two albums, including 2006's Le Voyage du Sahar. Couturier has also, in the years since the last Tarkovsky Quartet and Moderato Cantabile, been involved in Brahem's sweeping, orchestral Souvenance (ECM, 2015), while Matinier released, with Nyckelharpa player Marco Ambrosini, his first album as co-leader on ECM, 2014's Inventio, in addition to collaborating on Louis Sclavis' Napoli's Walls (ECM, 2003). Lechner continues to work on both sides of the ECM divide—its regular series, largely devoted to improvisation-rich music; and its New Series of largely classical, largely form-based music—as well as in the increasingly fuzzy space between the two.

While not heavily active with the label beyond Tarkovsky Quartet, Larché can be found on Orchestre National de Jazz's 2003 ECM date Charmediterranéen, while the saxophonist made an even earlier appearance on Anouar Brahem's 1994 masterpiece, Khomsa, rendering the Tunisian something of a connective thread with Tarkovsky Quartet. But it's a lesser-known release by Couturier, Larché and Matinier, Music For A While (émouvance, 2002), where the seeds of what would become Tarkovsky Quartet, with the ultimate addition of Lechner, would be more definitively sown.

What most differentiates the largely dark, contemplative Nuit Blanche from its predecessors is the amount of group improvisation. The quartet's previous two albums had two or three collective improvs adding up to a small percentage of each record's run time; Nuit Blanche, on the other hand, includes a full eight spontaneous compositions, occupying a full quarter of its seventeen- piece, hour-long program. Like those collective improvs, the majority of Nuit Blanche's remaining compositions are miniatures, with most in the three-to-five-minute range.

Only the brooding "Urga" clocks in at a more expansive eleven minutes that, while written by the pianist, allows for plenty of exploration from the very start, where Couturier—working inside and outside the piano box—slowly comes together with Lechner for a slow, arpeggio-driven theme, as the cellist contributes some of her best work. From delicate, wisp-like harmonics to more firmly bowed notes with a vibrato all the more lovely for Lechner's restrained use, "Urga" is, like most of Nuit Blanche, the stuff of dreams, and of that ambiguous period between being sleep and awake.

A lilting solo from Larché, bolstered by Couturier's arpeggios, moves in and out of the harmony...sometimes inspiring, sometimes inspired by Matinier's occasionally curious harmonic injections. Lechner, too, contributes a solo all the more impressive for her coming from a classical background...and yet, just watching her work for ECM—ranging from time spent with Couturier, pianist Vassilis Tsabropoulos on, amongst others, 2008's superb Melos), pianist Ketil Bjornstad on his similarly cinematically inspired La Notte (ECM, 2013), and Argentinean bandoneonist Dino Saluzzi on a career high point, 2007's Ojos Negros—and the upward trajectory of the cellist's improvisational capabilities is crystal clear. Also featuring a stellar solo from Couturier, whose touch and use of pedals creates a soft yet still-rich tonality, "Urga" is not just the album's centrepiece because of its duration or its relative mid-point position on the album; it's the centerpiece because, while the quartet explores plenty of other colors, textures and stylistic spaces, if but one track had to be chosen to demonstrate this quartet's fullest potential, it would have to be "Urga."

Elsewhere, Couturier's Tarkovsky-inspired writing—which the quartet consistently lifts off the written page into lives filled with subtlety, nuanced interpretation, deeper lyricism and the quirkily enigmatic yet cinematically evocative—is fleshed out by a refined-yet-open group-arrangement of Vivaldi's Baroque-era "Cum Dederit Delectis Suis Somnum," from the 18th century Italian composer's sacred Nisi Dominus, as well as a suitably subdued but still majestically poignant early 16th century anonymously composed Renaissance period piece, "Quant ien congneu a ma pensee," arranged by Couturier and Lechner. Both tracks seem, on paper, to be unusual inclusions—and, indeed, represent the first time, at least on ECM, that Couturier has not just chosen music from other composers, but ones dating back hundreds of years; still, the quartet's impressionistic bent places them comfortably amidst the rest of the repertoire while, at the same time, expanding the group's overall purview.

Impeccably sequenced as usual, Nuit Blanche demonstrates continued growth for Couturier and Tarkovsky Quartet. The music may be dissonant and hard-edged, as it is on the appropriately titled "Vertigo" or similarly dark-hued but more spacious "Traum V" (another spontaneous creation which immediately follows); it might be more direct and immediate in its thematics, as is the pianist's Zen-like title track; or it may employ simple but harmonically oblique arpeggios to support a pointillistic saxophone solo, with Lechner using the body of her cello as a spare percussion instrument, as takes place on Couturier's "Soleil sous la pluie."

No matter what direction Tarkovsky Quartet takes, the music of Nuit Blanche is largely more suggestive than it is explicit. A finely hued combination of melody and texture, scripted form and unfettered free play, and a distinctive group sound that has nevertheless expanded, album after album, as the quartet has continued to embed more and more touchstones in its music, Nuit Blanche is this exceptional chamber group's finest album to date...and with the trilogy now a quartet, the hopes that Couturier will continue his winning streak with more cinematically inspired work with this wonderful ensemble.