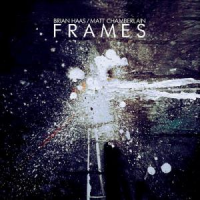 It is not often an album confounds expectations to the degree that Frames does. And confounds them not just once but twice.

The first expectation arises from the players' histories. Brian Haas is best known for his work with Jacob Fred Jazz Odyssey, the spectacularly trans-genre band which the pianist co-founded twenty years ago. Drummer Matt Chamberlain has worked with neo-classicists such as pianist Brad Mehldau and guitarist Bill Frisell, but is better known for his recordings with beyond-jazz artists such Critters Buggin' and keyboardist Marco Benevento.

So it is a surprise to discover that Frames is a through-composed suite which Haas conceived as a solo keyboard exercise progressing methodically through the sequence of tempered keys.

The second expectation, therefore, is that the album, though it might be musicianly and academically worthy, will be austere and dull, dull, dull. Chopin composed keyboard exercises which shimmered, but composers with Chopin's genius do not come along often.

So it is a surprise to discover that Frames is tuneful and fun, fun, fun. Haas' themes (to call them "exercises" unfairly reduces them) take in lush romanticism, stride piano and minimalism, and the hotter ones are played with gusto. As Haas acknowledges, much of the music's success as a performance piece is down to Chamberlain's input. Chamberlain turned "turned skeletons into sentient beings," says Haas, "(giving) each piece its own personality and color." Together, the duo work through the eleven, often forceful pieces in perfect accord. Chamberlain does not match Haas note for note throughout, but there are many passages of up-tempo unison fireworks and they are as thrilling to listen to as Charlie Parker and Dizzy Gillespie delivering a tricky bop theme in precise unison. At lower temperatures the mood is bittersweet-romantic and may put you in mind of singer-songwriter Jeff Buckley.

Haas wrote Frames following his move from the bustle of Tulsa to the mountains and high desert around Santa Fe. It was, perhaps, his way of centering himself amidst the enormity of the natural world newly surrounding him. If so, what began as a meditation has turned into an entertaining romp.

Birth; Open Windows; Death: An Introduction; Prism; Of Many, One; Niche; Drive; Death: An Observation; Closing Window; An Empty House; From Nothing, Infinite.