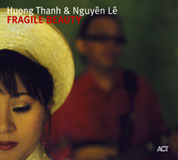 Fragile Beauty isn't the first time that singer Huong Thanh and guitarist Nguyên Lê—both Vietnamese-born, Paris-based—have worked together, but it is the first time they've shared the bill. Thanh has released three other ACT albums on which Lê produced, arranged and performed, and she's appeared on two of Lê's own discs—Maghreb & Friends (ACT, 1998) and the particularly stunning Tales from Viêt-Nam (ACT, 1997). Every one of these albums leads inevitably to Fragile Beauty, an album largely consisting of thoughtfully arranged traditional songs, but with some newly written material that sounds both as timeless and contemporary as the Vietnamese material Lê has arranged.

Call it world music, world jazz or whatever label needs to be applied to give it context; the title of Fragile Beauty says it all. While there are songs propelled forward by a wealth of percussion—and, on "The Swallows' Bridge," by Karim Ziad's drum kit, which kicks in half-way through, locking in tightly with bassist Etienne Mbappé for a groove more Afrobeat than Oriental—there's a pervasive sense of delicacy and spare beauty. Despite the cultural source of the material, the preponderance of percussion instruments from around the globe, electric guitars, programming and sampling make this music of a global nature, with sophisticated harmonic elements pulled from (but not in) the jazz tradition, some of Lê's textures fusion- like (but his playing rarely approaching it) and guest trumpeter/flugenhornist Paolo Fresu's harmonized playing on "Swallows' Bridge" referencing Nu Jazz without actually being it.

Lê, in fact, has always been remarkable for integrating his stylistic blend of jazz language and occasional rock-edged stance with the kind of microtonal bends that are inherent in traditional instruments like the zither-like koto, which is featured on half of the album's twelve tracks. On the ethereal "Faithfulness," only he and kotoist Mieko Miyazaki support Thanh's evocative voice, and their instrumental duet at the song's center crosses cultural boundaries with stunning improvisational élan. That the lyrics here, and throughout the album, are in Vietnamese makes no difference. Their meaning can be felt, with brief notes in the liners providing the sparest of contexts.

Lê enlists the help of friends that have appeared on other albums with him and/or Thanh. Bass duties are shared across seven tracks by Mbappé and acoustic five-string bassist Renaud Garcia Fons, who made Lê's Bakida (ACT, 2000) so compelling. "Plantation Song" begins atmospherically with the sounds of percussion, koto and dàn tranh zither, but assumes a stronger, bass-driven groove, over which Lê and Stéphane Guillaume layer nylon-string and flute lines, leading into Guillaume's lithe and undeniably jazz-centric soprano saxophone solo.

But why try to place a name on what this music is? Instead, with Thanh's rich and expressive voice, Lê's triple threat in arrangements, production and performance as well as the contributions of eleven musicians on over thirty instruments from around the globe, Fragile Beauty simply is an album that captures the heart from the first note and leaves it hungering for more as the last one fades.

Visit Huong Thanh and Nguyên Lê on the web.

Drifting on the Water; Weaving & Awaiting; Faithfulness; Plantation Song; The Five Calls of the Night; Fragile Beauty; Rowing the Sampan; The Pavilion of Crystallized Azure; At Dusk, from the West Balcony; Go Cong Blues; The Swallows' Bridge; Tales of the Mountain.