BY WOODROW WILKINS
September 24, 2010
Sign in to view read count 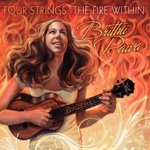 The cover of Four Strings: The Fire Within tells the story. A painting of flames behind Brittni Paiva highlights her passion for making music.

The multi-skilled Paiva, at the age of 21, is recognized as the finest female ukulele player in Hawaii. She's won several awards, including the 2005 Na Hoku Hanohano Award, from the Hawaii Academy of Recording Arts, for Most Promising Artist of the Year. For her fourth release as a leader, she is accompanied by a variable lineup that includes bassist Dean Taba, percussionist Joey Respicio and keyboardist Karl Kasberg. Co-producer Charles Michael Brotman provides drum programming and guitar on selected tracks.

"Tamucun" begins the set, with Paiva licking her chops on ukuleles, guitar and percussion. With modest contributions from her sidemen, Paiva sets her fingers for a fiery pace.

"Cruisin' on 7"—the title is derived from the seven-pound turbocharger installed on her car and one of four Paiva originals—is an easygoing, highway driving song, with drummer Garin Poliahu sitting in and using his snare drum and cymbals to optimum effect.

Paiva performs an eclectic mix of cover songs, such as Maroon 5's "Sunday Morning," Djavan's "Acelerou" and Santana's "Europa." The arrangements, while not adventurous, are pleasant, and in some cases, danceable. For "Hour of the Lamps," she brings in composer Johannes Linstead, who plays Spanish guitar on the ukulele-led arrangement. The piece would be right at home in an Arabian Nights story.

While the running time of Four Strings: The Fire Within is a minimalist 35 minutes, Paiva and her companions pack a lot of joy into that frame.

Tamacun; Cruisin' On; Sunday Morning; Acelerou; Hour of the Lamps; Somewhere Over the Rainbow; Made for Me; Europa; Fusion: West; Fusion: East.