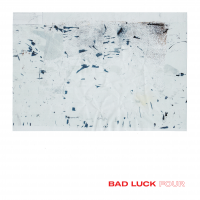 For over a decade, Seattle-based duo Bad Luck—that's Neil Welch (saxophones, electronics) and Christopher Icasiano (drums)—have packed and unpacked their deceptively simple formula of drums and saxophone. Through their deep musical partnership, they continue to recast the mold of contemporary music. Over countless fiery performances and three full-length releases, the depth of the duo's compositional improvisations has steadily developed, starting from the catch-as-catch-can edge of their classically free-jazz 2009 self-titled debut, moving the sprawling, heavy-metal intensity of 2011's double-album Two, and changing into the grooving, Roscoe Mitchellian modularity of 2014's Three, all on Table & Chairs Records.

This year, Icasiano and Welch rocket forward with their newest release, Four. The album continues their career-long, interlocked drive—like watching a car part dance in an invisible engine—but sustained now at a new altitude. Through the use of delay and echo effects, elegantly captured by producer Randall Dunn, their kinetic, amorphic sound has stretched out to take on a new suspense and pathos.

Yet even more than its predecessors, Four immerses the listener into the logic of its own musical world. For the eponymously titled opener, the godlike growls of Welch's saxophone are drenched in a repeating, Stravinskyan riff, while Icasiano shifts walls of propulsion around him in a charging run. In the following track, "RBG," the duo deconstructively expand a similar urging impulse, with Icasiano rewinding rhythms into a spine-tingling breakdown. For "Index," the duo applies the same razor-sharp focus to an ambient landscape: Icasiano's frantic brushwork intercut with the oceanic harmonics of Welch's tape-spliced motif.

That's not to ignore the duo's serious acoustic chops. Take, for example, "Capital," a collage of fountainous jets and schizophrenic melody-rhythms, like the manic breakdown of a frenetic machine. The album's closer, "Big Sky," is built on similarly expert foundation, formed as a long crescendo that runs from the soft river of Icasiano's mallets and the elegiac voices, clarion and siren, of Welch's sax. Though the product of intense musical effort, the effect is like feeling the rain come in at the end of a hike.

Rather than music, the layered cohesiveness of the album might suggest more the tricky multidimensionality of works by contemporary artists such as Tauba Auerbach, or the total sensuality of Andrei Tarkovsky's films. Events progress, balanced but compelling; sound moves ever closer to something like the experience of the natural world. With the frank engineering brought about by Welch's and Icasiano's formidable technique and uncanny intuitions, Four presents a triumph in form and a step forward for both artists. It is a startling musical statement will subtly overtake and amaze its listener.

Note: This article was originally published for the Earshot Jazz newsletter.