Arborea: Fortress of the Sun

By Glenn Astarita
August 24, 2013
Sign in to view read count 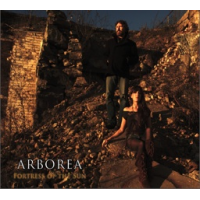 This acoustic-electric set is devised with hauntingly melodic themes that sometimes drift into an interminable abyss. The creative touch of studio-induced echo adds capacious characteristics to the program amid some offbeat treatments, contrasting the mystical aura often underscored with Americana and hush-toned spoken word segments. Shanti Curran and her husband Buck employ banjo, guitars, harmonium and even an Ebow banjo into the mix, and the album is indicative of the ESP Disk label's occasional detour off the free-jazz realm, spanning its inception as a renegade entity for over fifty years.

"Daughters of Man" is a counterbalancing act, consisting of Shanti Curran's wordless vocals and gently strumming acoustic guitar work, offset by Buck Curran's psyched-out, streaming electric guitar lines. The artists generate a broad plane here and on other tracks, where notions of surrealistic folk come into play. However, "When I Was on Horseback" is a piece that subtly morphs English folk with American country-folk and a wistful hook, tinted with searching attributes. Here, images of rural greenery via undulating hills are evoked, with Shanti Curran shaping an ode to a stallion that will also carry her coffin, as the lyrics disclose.

Modest by design, it's an enchanting event that propagates a heavenly muse, while offering escapism for the restless mind.