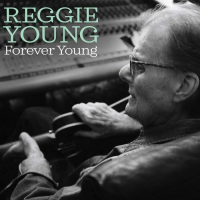 It's good that guitarist Reggie Young is Forever Young, as he waited until he was almost eighty years old to record the album of that name, the first as leader of his own group(s) after six decades of backing innumerable pop stars including Elvis Presley, Neil Diamond, Dusty Springfield and Willie Nelson. While Young shows he can still play a mean guitar, he has brought along some baggage, namely the sort of pop-rock frame of mind on which he built his undeniably successful career.

In other words, what Young has produced is an album that comprises seven of his original compositions, none of which could be construed as jazz in the truest sense of the word. Although some may graze the surface of jazz (which is giving them the benefit of a doubt), the closest any of them lands would be in genres such as smooth jazz or jazz-country, if there is such a thing. Young may be a first-rate musician but he's no improviser in the way that, say, Pat Metheny, Howard Alden, Bucky Pizzarelli or Kenny Burrell is an improviser.

Instead, Young treads close to the melody while his colleagues, whose names vary from track to track, frame a rhythmic backdrop that is more pop than jazz, more country than swing, with an insistent backbeat that overshadows any urge for a more sophisticated approach. Even with instrumental variation, there is a general sameness of tempo and rhythm that calls to mind the sort of amorphous music that one hears all too often in elevators, shopping malls or eating establishments.

For the record, Young's group includes a Wurlitzer organ on half a dozen tracks, Hammond on the other, cello on four, electric piano or synth, bass, drums and horns of various kinds on at least five numbers (and on none of which they make any sort of audible impression). For what it is, Forever Young is presumably fine; it should in no way, however, be presented as or linked to jazz as the term is commonly used.