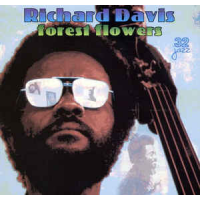 Continuing a pattern that’s becoming all too common with 32 Jazz reissues, this set is a heavily flawed collection of performances by a generally fine bassist. The label heads seem to rummage through the dusty closets of name artists, seeking out weak sessions that probably wouldn’t see the light of day again if the performers weren’t famous for better works. Such is the case with Forest Flowers, culled from three lesser Richard Davis sets from the 70s.

Davis is a renowned bassist whose credentials include stints with Ahmad Jamal, Stan Getz, Eric Dolphy and Andrew Hill. His first solo album, Muses for Richard Davis, is a classic of post-bop jazz, but his taste hasn’t always been so discerning. The compositions collected here are good enough (indeed, some are true jazz classics) and the sidemen are generally top players in fine form, but some of the leader’s own performances leave much to be desired.

One major complaint is with Davis’ arco (bow) work. His intonation on Forest Flower and Passion Flower is abominable, as if he’d never picked up a bow before. Those two tracks are possibly the worst things Davis has ever recorded, and why 32 Jazz sought to include them here is beyond comprehension. There is some nicer bowing on the earlier Dear Old Stockholm, though. Oh, wait. Never mind. That’s Bill Lee, theotherbassist on nine of these tracks. That’s right, on much of this album the leader is outplayed by a supporting bassist. In fact, Lee is featured prominently on tracks 6 through 8. Of course the CD packaging makes no mention of that, just barely squeezing in a mention that Lee is in the left channel.

In all fairness to Davis, he fares much better on tracks like A Third Away, which has an excellent extended pizzicato-bass intro, and On The Trail, which is a section of Ferde Grofé’s Grand Canyon Suite. The last three tracks are probably the most satisfying, due in large part to the presence of tenor man Joe Henderson and pianist Stanley Cowell. Davis’ vibrant tone on I’m Old Fashioned is almost tuba-like, his soloing and comping more imaginative than most of the other cuts. 32 Jazz would have done better to reissue the entirety of Way Out West, the 1977 Muse album that the last three tracks were drawn from, and flush the rest of the material found here. This collection is only for Davis completists, if even they would have it.