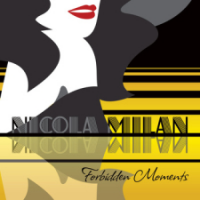 It should be no wonder that Australia produces musicians whose art reflects a broad blend of the Northern and Southern Hemispheres. Perth native Nicola Milan refers to the genre to which her brand of music belongs, Australasian jazz, and her own pedigree as Welsh/Anglo-Indian. That is every bit as exotic and humidly appealing as the self-description of another Aussie national, Alisha Pattillo (Along For The Ride (Self Produced, 2012)), who refers to herself as "A half-Australian/half-English/raised-in-Singapore saxophonist." Beat that melting pot!

On Milan's debut recording of all original compositions, Forbidden Moments, those "Australasian" elements of her music are heavily influenced by the Latin jazz of the Caribbean and South America, as well as, pre-war Europe and 1950s United States. The disc opens with an interesting quartet between Milan, clarinetist Michael Collinson, guitarist Rick Webster and pianist Ben Clarke called "No Room For Promises." It is a beautiful throwback piece to the period between the two world wars, when ethnicities and traditions mingled freely in music. There are elements of East Europe Jewish tradition seasoned with Hot Club of France and American expats on the Left bank.

The Bossa Nova, "Love Me More," could have been composed the same night as Antonio Carlos Jobim's "Corcovado." It is breezy and sensually delivered by Milan with a serpentine flamenco guitar gently stirring the pot. Its pure organic nature complements Milan's vocal approach well. Not completely satisfied with the Southern Hemisphere, Milan rolls out the strolling bass line of "Making Love" ("Faire L'Amour"). Steamy and pungent, Collinson's tenor saxophone recalls that of Dexter Gordon during his Paris and Copenhagen days. "The Waiting Game" is a dark piece founded on Clarke's sumptuous block chords and descending figures: less jazz, and more a Paul Simon-flavored ballad.

Milan sings through the rest of the world with her confident alto voice, well-balanced, inside and out. She shows that she can readily compose and sing in any genre or subgenre she chooses whether the gypsy-tinged tango of "The Scent of Her Perfume" or the American stage ballad "I Begin To Understand." Milan's is a voice that will be unknown no longer.

No Room For Promises; Love Me More; Faire L’Amour; The Waiting Game; Siren’s Song; The Scent Of Her Perfume; Medicine Man; I Begin To Understand; Wrong Words; The Lonely Flute.