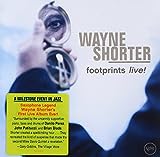 For decades it seemed that Wayne Shorter had lost interest in acoustic jazz. But a 1998 Lincoln Center performance hinted at his continued stake in the idiom, and a few years later, in 2001, he thrilled the jazz community by embarking on a whirlwind tour with a stunning new quartet. Featuring pianist Danilo Perez, bassist John Patitucci, and drummer Brian Blade, Shorter's group raised the roof wherever it went, garnering rave reviews and proving that the iconic saxophonist had a great deal more to say.

Footprints Live! documents this mighty bands work on the road, and provides a truly revelatory encounter with some of Shorters best work from the classic Blue Note period. (It is in fact Shorter's first all-acoustic album since 1967's Schizophrenia.) Together with his youthful compatriots, Shorter breathes new life into compositions like "Go," "JuJu," and "Footprints," the last of which has become every inch a standard. Theres also a strong rendition of "Valse Triste," the Sibelius theme that Shorter adapted for 1965's The Soothsayer. The Japanese release contains a version of "Chief Crazy Horse," the last track on 1966's Adam's Apple.

Shorter also opts to include material from later years ("Atlantis," "Aung San Suu Kyi," the latter originally a duet with Herbie Hancock), as well as entries from the Miles Davis canon ("Sanctuary" from Bitches Brew, "Masqualero" from Sorceror). The music is raw and explosive in the hands of these fine players, not least of all Shorter himself, whose brawny, instantly identifiable sound on tenor and soprano remains very much intact. Absolutely stunning, without doubt a major addition to Shorter's discography.