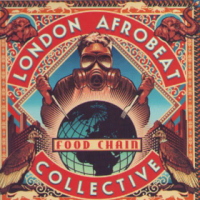 It's based in London, it's a collective and it plays afrobeat, a strongly rhythmic musical style associated particularly with Fela Kuti. That's the basic info. Much more importantly Food Chain, the London Afrobeat Collective's second album (there are a couple of EPs too), is a bit of a monster—full of dancefloor-filling beats, allied to politically-aware lyrics, delivered by a 10-piece group that's bursting with energy.

This mix of politicised lyrics and dance party music recalls UK bands of the '80s such as Working Week. The London Afrobeat Collective is blessed with a tight, funky, rhythm section. It's the heart of the band, beating as hard and as fast as the music demands. Indeed, most of the musicians are part of this section—bassist John Matthews, guitarists Alex Farrell and Alex Szyjanowicz, percussionist Zak Cohen, conga player Lee Crisp and drummer Farivar Gorjian form a powerful sextet.

With such a strong and savvy rhythm section in place, the horns—Andy Watts on trumpet, Edmund Swinburn and Klibens Michelet on tenor and baritone saxophones—need to be confident and assertive. Collectively and individually, they are. As a section, the trio bursts out with immediately catchy riffs: the occasional solos are crisp and melodic.

Vocalist Funke Adeleke has a strong personality and an equally strong voice. They enable her to stamp her authority on the songs, delivering the strident and direct lyrics with conviction—there's never any lack of clarity on songs like "Celebrity Culture," "I No Be Criminal" or "Prejudice"—and with a vocal power that heightens the impact of the music laid down by her bandmates.

Solos are relatively infrequent and when they do appear they're generally brief but memorable—"Say What You Mean" and "First World Problems" feature attacking guitar solos (unfortunately there's no information as to which of the guitarists gets the credit); on "Prime Minister" it's the sax players who each make an impact. But the London Afrobeat Collective isn't about lengthy solos, it's about the sheer musical power of a ten-piece band in full flight. Food Chain is the product of a band with a message—a message allied to some of the finest music for dancing one could wish to hear.