By JOHN KELMAN
September 4, 2007
Sign in to view read count 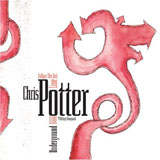 In a rare move, saxophonist Chris Potter has released two CDs on the same day, and on the same label—Song For Anyone, his first album for a large ensemble; and Follow the Red Line: Live at the Village Vanguard, featuring the Underground band that's been touring for the past couple of years. Risky, perhaps, but Potter's significance—the clear torch-carrier for the recently departed Michael Brecker— continues to grow, and is one of a limited number of artists who can actually pull it off.

Potter's discography has been getting better with each passing year, but Underground (Sunnyside, 2006) was a true watershed, where conception, composition and performance came together for the most distinctive and fully realized album of his career. Follow the Red Line is even better, featuring the same group but with guitarist Adam Rogers in place of Wayne Krantz, whose sharp attack and oblique lines were amongst Underground's defining points. Those only familiar with Rogers' largely acoustic Criss Cross discs, including 2005's Apparitions, may be surprised to hear him kick such serious butt here, but those who've heard his mid-1990s work with Lost Tribe know that he's undeniably capable of this kind of electrified, rock-and funk-edged music.

The gentle opening fanfare of "Train" starts the set on a lyrical and subdued note, but it's not long before drummer Nate Smith kicks in with a visceral funk groove, bolstered by Craig Taborn's uncannily dichotomous Fender Rhodes. Potter takes the first solo, building from ground zero to the stratosphere and demonstrating the kind of paradoxical blend of restraint and reckless abandon that makes his extended solos not just consistently captivating, but exhilarating. The same goes for Rogers, whose solo begins in melodic simplicity, but quickly takes off with a raucous energy and linear invention that's the main reason why he, along with Ben Monder, are two of New York's most in-demand guitarists across a wide swatch of styles. His tone is dense and sustaining, with a punchy attack and, like Potter, has an ability to milk the simplest of vamps for all it's worth.

Taborn gets to do the same thing during the unrelenting, single-chord vamp that's at the core of "Arjuna," with Rogers soul-drenched single-line anchoring hand-in- glove with Smith's loose and unyieldingly responsive groove. "Pop Tune #1" offers a brief respite; a countrified ballad where Roger's rich, sustaining chords support Potter's singable melody before taking a blues-drenched lead. Rogers builds dramatically, only to suddenly dissolve as Potter morphs the tune into another lengthy and funk-laden vamp where everyone raises the temperature during his blistering and idea-filled solo.

It's an exercise in futility to find a name for the music of Follow the Red Line. But as Potter blurs the lines between jazz, rock, funk and even a little afro- beat in ways that are finally being accepted again two decades after The New York Times declared the "pestilence known as fusion is dead," the best word to describe this recording is, quite simply, great.