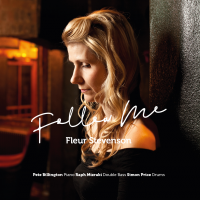 There are plenty of standards adorning Fleur Stevenson's debut album. This comes in the wake of her career-launching salvo, an EP entitled Introducing Fleur Stevenson, released in 2016. Stevenson possesses an appealing voice and, on the breezy opener "Beautiful Love," proves she can scat as deftly as she can sing Haven Gillespie's memorable words. While the majority of the album's eleven tracks are derived from the Great American Songbook, there are a couple of obvious outliers included here. Tim Hardin's lyrical "Misty Roses" is given an appropriately elegant work over. But the real oddity is Ian McDonald and Pete Sinfield's "I Talk To The Wind," which first appeared on the King Crimson proto-prog rock album In The Court Of The Crimson King (Island Records, 1969). Although it is unusual to be re-envisaged as a jazz song, especially a samba, Stevenson does a good job of adding poignancy to what was an atypically romantic number for Robert Fripp's seemingly immortal band.

Another track that isn't usually attributable to the canon of American standards is "Can't Help Falling In Love" (despite Andy Williams' best efforts), but Stevenson succeeds in converting this torch song into a sultry, jazzy ballad. The choice of other numbers is more predictable, such as "Teach Me Tonight" and "I Thought About You," where Stevenson's perky delivery appears to channel some of her vocalist predecessors such as Peggy Lee and Stacey Kent. She can also swing with the best of them as heard on the old Frank Sinatra hit, "Old Devil Moon."

Stevenson clearly benefits from a winsome voice that delivers right-on-the-money versions of Hoagy Carmichael's irresistible "The Nearness Of You" and Cole Porter's timeless "You'd Be So Nice To Come Home To," replete with more groove-laden scat singing. But Stevenson also benefits from a first-class backing trio, as evidenced by Pete Billington's piano solo on "Beautiful Love" and Raph Mizraki's bass solo on "I Thought About You." Meanwhile, the closer, Michel Legrand's "You Must Believe In Spring," provides a gorgeously sensitive finale to fifty minutes of charming vocal jazz.

Beautiful love; Misty roses; Follow me; The nearness of you; You'd be so nice to come home to; Can't help falling in love; Teach me tonight; I talk to the wind; I thought about you; Old devil moon; You must believe in spring.