BY TROY COLLINS
September 18, 2014
Sign in to view read count 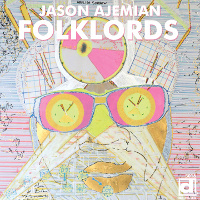 Folklords is one of the most adventurous albums to be issued by Delmark Records since Levels and Degrees of Light, the auspicious recording debut of pianist and composer Muhal Richard Abrams in 1967. Bassist Jason Ajemian's second effort for the venerable label, following 2008's The Art of Dying, conceptually surpasses his prior work by leaps and bounds. It shares significant similarities with Abrams' premiere, including the use of spoken word and expansive dynamics that veer from impressionistic balladry to rhapsodic free jazz.

The first in a series of planned homages to acknowledged masters, the arrival of Folklords coincides with Sun Ra's 100th anniversary. Featuring imaginative tributes to Ra, Charles Mingus and Thelonious Monk, the session incorporates subtle elements from some of their most beloved tunes into an episodic series of abstract excursions. Joined by Kid Bliss aka That Young Astronaut on amplified alto saxophone, electric guitarist Owen Stewart-Robertson and drummer Jason Nazary, Ajemian and company imbue the proceedings with a quixotic sensibility, courtesy of their inspired versatility.

In addition to his protean bass work, Ajemian occasionally recites stream of consciousness poetry with a naked emotionalism that belies its stylized affect. Politicized but abstract, the leader's melodramatic verses call out everyone from Michael Bolton to Lady Gaga, but when Stewart-Robertson simultaneously narrates pre-written text with scholarly deportment, their clever wordplay blossoms into a spellbinding collage, fortified by coruscating layers of electronic feedback and the roiling interplay of deconstructed tribal rhythms.

Consisting of five lengthy selections, the set unfolds seamlessly, like a suite whose whole is greater than the sum of its parts. Cubist alto fragments, kaleidoscopic fretwork, pliant basslines and nervy drumming coalesce into a phantasmagoric opus that gracefully shifts between bluesy serenity and blissed-out catharsis. With its broad sonic reach, Folklords juxtaposes the fervency of punk and no wave with the cosmic spirituality of the New Thing, yielding a riotous fever dream of things to come from those now gone.