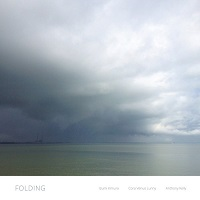 Inspired by environmental sounds in the townlands surrounding Dún Laoghaire, County Dublin, Folding brings together Irish sound artist Anthony Kelly and two of Ireland's preeminent contemporary musicians, Yokohama-born pianist Izumi Kimura and violinist Cora Venus Lunny, reunited here following their memorable performance at Improvised Music Company's Ban Bam festival in 2017. The song titles reflect the bucolic nature of this project, though there is plenty of passion in Kimura and Lunny's interplay. With his pristine recordings of the sea, wind, leaves, rain, thunder, bees and birds, Kelly constructs a vividly immersive experience that is lent wings by Kimura and Lunny's sympathetic and intuitive responses.

A contemplative atmosphere colors "Sea," where the sound of water lapping against shoreline draws impressionistic lyricism from Kimura and high-pitched sustain from Lunny, whose strings resonate like sotto voce feedback. By contrast, a scurrying intensity prevails in "Bees in Wild Poppies," with both piano and violin subtly evoking the movements and voices of these key pollinators; tumbling and soaring, pianist and violinist are busy indeed. Wind conducts fallen leaves on "Dry Leaves," to which Lunny responds with rasping, brittle notes and Kimura with a cascading, head-over-heels momentum. Lunny plays the role of serenader on "Blackbird Sings to Nearby Birds" in a sweetly melodious dialogue, punctuated by the whoosh of a passing vehicle.

Despite the title, "Storm Emma" is a gentle, almost tender conversation between Lunny—on viola—and Kimura that harbours an emotional finesse. The tuneful thread of the lovely "For Stephen" feels the most through composed of all Kimura and Lunny's exchanges, which, elsewhere, seem largely improvised. Dedicated to a baby who died in 1972, aged just one month, in one of Ireland's notorious mother and baby institutions, "For Stephen" is a touching lullaby of caressing lyricism.

The steady patter of rain and intermittent rolls of thunder on "Rain and Thunderstorm" provide the canvas on which Lunny and Kimura intertwine feverishly, the duo unleashing a striking blend of staccato pulses, slippery glissandi and repetitive phrasing of some urgency. At the other end of the spectrum, the brooding minimalism of "Booterstown at Dusk" closes the album on an introspective note, with Kimura and Lunny treading lightly against the ever so faint hum of urban space.

Just as the seasons fold into one another, so too, the sounds of nature and those of human design—the foghorns, planes, cars and voices that are incidental passengers in Kelly's field recordings—exist in relation to each other. Kelly, Kimura and Lunny's haunting narratives reflect this symbiosis, folding into one another with inevitable, graceful gravity. There is a symphony of music in nature, and as demonstrated so compellingly by these three sound sculptors, there is an abundance of nature in music.