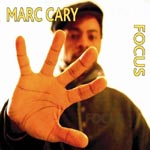 Some artists catch an early break. Others struggle to get onto the public's radar, despite great talent and stylistic range. It's curious that keyboardist Marc Cary hasn't caught on. His work with artists including trumpeter Roy Hargrove, vibraphonist Stefon Harris and singer Abbey Lincoln suggests that he's well-respected by his peers and considered capable of just about anything. Focus introduces his four-year-old Focus Trio, and while there may be too many acoustic piano trios out there, this is one that warrants attention.

Two recent performances by Cary with Harris' Blackout emphasized just how flexible he can be in a band that walks on stage with no set list and no game plan. Sure, Blackout has a repertoire, but what the group chooses to play from one night to the next—and how they choose to approach the material—can be vastly different. In recent Ottawa and Montreal appearances Blackout played "Taiwa, a tune written by Cary's drummer/tablaist, Sameer Gupta, and featuring a vocoder solo by altoist Casey Benjamin. While the song had a soulful backbeat in Ottawa, it was more abstract and impressionistic in Montreal.

On Focus "Taiwa is a more softly-spoken ballad, minus Benjamin's lyrics but no less poignant. Gupta replaces Blackout drummer Terreon Gully's firm backbeat and dramatic flourishes with a more restrained approach. It may revolve around a two-chord vamp, but its very simplicity makes it one of the album's most moving tunes.

Cary can be lyrical, but he can also be enigmatic. His swinging take on Jackie McLean's "Appointment in Ghana is a strange confluence of McCoy Tyner, Jaki Byard and Thelonious Monk. Clearly Cary understands the importance of building intensity, but he also knows when to breathe. "Walk With Me simmers through Gupta's insistent but lighthanded kit work and David Ewell's hypnotic bass line; both this piece and the modal waltz "So Gracefully feel as if they could have come from Tyner's pen, and Cary's combination of consideration and abandon are especially effective.

Things take a different turn on "Voyage to the Inside, a remarkable blend of Cary's appreciation for classical repertoire with more open-minded improvisation. Filled with classical references, including a well-placed nod to Erik Satie, the bold rubato tone poem ebbs and flows—approaching but never quite achieving resolution. Cary gradually shifts towards a blues-based approach that makes for a very personal musical history lesson.

The emphasis on this album may be jazz, but it's clear that the trio views cultural boundaries as constructs to be broken, as on Cary's "Self Preservation, which is driven by Gupta's tablas, and the even more propulsive "A Long Walk Home, where Ewell and Gupta create a turbulent maelstrom beneath Cary's lengthy solo. Cary brings the album full circle by ending the final track, the paradoxically named "Gentle Wind, with a quote from "Appointment in Ghana.

Cary's not a pianist disposed to showboating, but with Focus he has consolidated his career as gun for hire into a more personal statement that wears its roots on its sleeve but presents them in ways that never sound purely retrospective.

Appointment in Ghana; Walk With Me; So Gracefully; Voyage to the Inside; Elephants Eye; Ready or Not; Taiwa; Self Preservation; A Long Walk Home; Gentle Wind.