By JEROME WILSON
November 16, 2019
Sign in to view read count 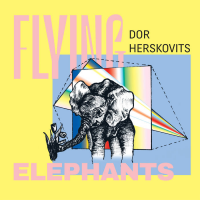 Drummer Dor Herskovits has been recording since 2017 as a member of the forward-thinking jazz group Earprint. His own quintet has a similar modern style but does more incorporation of older jazz traditions into its work.

This group's music can be either raucous or dreamy and sometimes brings up refracted echoes of other players. On "Palette" pianist Issac Wilson and the leader sway together through a wispy melody like Paul Bley and Paul Motian accompanied by Hery Paz's wavering tenor and Calo Afiune's twanging guitar. Paz is also capable of an old-school, heavy tenor sound that she uses well on the tradition-laced ballads "Come To Light" and "New Fashioned." She plays on these with a romantic lushness that makes a strong contrast to the muted drama of Wilson's piano and the slippery melancholy of Afiune's guitar. "Recursion" looks back in a subtler way. It starts with a tautly running rhythm constructed by Herskovitz, Afiune and bassist Max Ridley. Paz follows with a burst of spurting unaccompanied tenor before leading everyone into a hard-charging variation on Thelonious Monk's "Epistrophy," where Wilson's dancing piano becomes the focal point.

On other tracks the band completely leaves the jazz mainstream and runs off into its own world with other musical genres for inspiration. "Magenta" starts with Paz punching over a nagging rock rhythm, but later brings in spots of sleazy tenor wails and spiraling rock guitar. "Sob" begins with a measured classical formalism in its combination of sensitive acoustic guitar, groaning arco bass and lamenting tenor. It then moves through waves of thick exotic guitar, dizzying sax cries, and light romantic piano all held together by the focused stalk and tumble of the bass and drums. "Scottish Fold" is a jittery exercise of guitar, sax and piano all jangling freely together. Finally there's the hallucinatory prog fusion of the title track, tinkling piano giving way to lurching, clipped beats that set the stage for runs of bellowing tenor, nervous piano and burrowing guitar with a chorus of deep menacing voices also briefly showing up.

Herskovits' quintet is not afraid to play around with jazz tradition and can also come up with interesting ideas by combining other styles. Their music is fun and original.