By IAN PATTERSON
December 21, 2014
Sign in to view read count 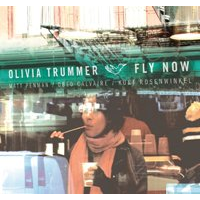 Singer or pianist? Actually, both hats fit Stuttgart-born Olivia Trummer pretty snugly, as evidenced by her splendid opening slot for Charles Lloyd in Dublin's National Concert Hall in November—alongside bassist David Redmond and drummer Kevin Brady—and her subsequent sell-out show at the EFG London Jazz Festival. Trummer possess a soulful voice of pristine quality and displays a feathery, understated lyricism on the keys; both assets are finely tuned and beautifully balanced on this, her fifth recording as leader.

As a singer and lyricist Trummer is something of a late bloomer. A classically trained pianist and a jazz piano graduate from the Manhattan School of Music, it wasn't until Nobody Knows (Neuklang, 2010)—her third release -that she felt confident enough to flex her vocal pipes. It's a case of better late than never, for on these original meditations on matters of heart and mind Trummer's crystal-clear articulation seduces like a jazzier Norah Jones. Her softly poetic introspection is lent New York gravitas by the rhythm team of Obed Calvaire and Matt Penman, with Kurt Rosenwinkel adding luster to several numbers.

On the persuasive opener "Precious Silence" Trummer sings of "bridges built to change our lives" and this quietly stated optimism is emphasized by mantra-like repetition. It's a stylistic approach she reprises on the lightly funky "Gotta Miss Someone" and the jazzy "All is Well" -two tracks with potential commercial radio appeal—and the slow-burning epic "Sharing My Heart." On this latter tune, Rosenwinkel weaves atmospheric lines over Trummer's continuous two-note motif while Calvaire and Obed move effortlessly between sotto voce stealth and stronger pulses.

Trummer's playing is characterized by economy and a lightness of touch, notably on the blue-toned title track; it's a solo outing of exquisite delicacy and throughout the recording in general mood trumps technique. Calvaire's brushes stir almost subliminally on the slow tempo track "Snow Colored Streets" as Trummer's high vocal notes glide over the sparse architecture. Likewise, the spacious arrangement of "Watching the Moon" accentuates the nuances of Trummer's caressing, less-is-more style. Her lilting wordless improvisations are also used sparingly, though perhaps a little more adventure in that department would have added spice.

Occasional Rhodes piano and shimmering Hammond C3 inject strokes of color here and there, working particularly well on the slow-grooving "Stay Awake" where Trummer's soulful delivery underlines her obvious crossover appeal. Trummer's minimalist Rhodes dabs combine with Rosenwinkel's softly spiraling, pedal-driven lines on the arresting instrumental "Fly Now—Reflection" while her strengths as a balladeer are foregrounded on the trio number "Don't Ask Love," a haunting lullaby that could have come from the Bill Evans songbook.

Fly Now is Trummer's first release sung entirely in English and it could well be the one that introduces this multi-talented artist to a wider audience. Trummer's instantly appealing voice—emotive and sensuous—is arguably her chief weapon, while her lyrical piano playing works more subtle charms. The combination of the two on these finely crafted tunes is hard to resist.