Florence + The Machine with The Maccabees: Wantagh, NY, September 15, 2012 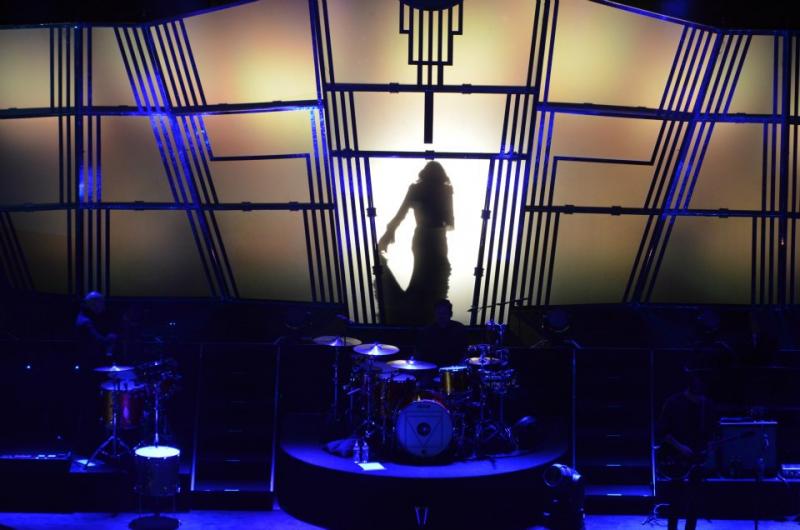 By MIKE PERCIACCANTE
September 29, 2012
Sign in to view read count
Florence + The Machine with The Maccabees
Nikon At Jones Beach Theater
Wantagh, New York
September 15, 2012
On a crisp September evening, two of South London's newest music exports invaded Long Island. The evening's opening act, Britain's The Maccabees, released its first single, "X-Ray" on Promise Records in November, 2005, and soon found itself opening for The Arctic Monkeys. The group's debut CD, Color It In (Geffen), was released in 2007 and gained The Maccabees fans and critical acclaim, along with the subsequent Wall of Arms (Fiction, 2009) and Given to The Wild (Fiction/Cooperative Music, 2012). Florence + The Machine's eclectic blend of pop, rock, soul, funk and classical (bordering on baroque) earned it and lead singer Florence Welch industry buzz during 2007. The band's debut single, "Kiss with a Fist," was released on the Moshi Moshi label in June, 2008. The following year, the group's debut CD, Lungs, was released on Universal Republic. Buoyed by the single "Dog Days Are Over," the album achieved platinum record status. In 2010, Universal Republic reissued Lungs as a two-disc deluxe package featuring a 12-track bonus disc containing live versions and remixes. A second studio album, Ceremonials (Universal Republic) was released in 2011. In 2012, Florence + The Machine released MTV Unplugged (Universal Republic), a CD/DVD collection filmed before a small audience that featured many of the group's best-loved tunes, as well as a cover of Otis Redding's "Try a Little Tenderness" another Johnny Cash/June Carter's "Jackson," with guest vocals from Josh Homme, of Queens Of the Stone Age. Florence + The Machine has also earned a large following, along with fantastic critical reviews in a relatively short period of time. 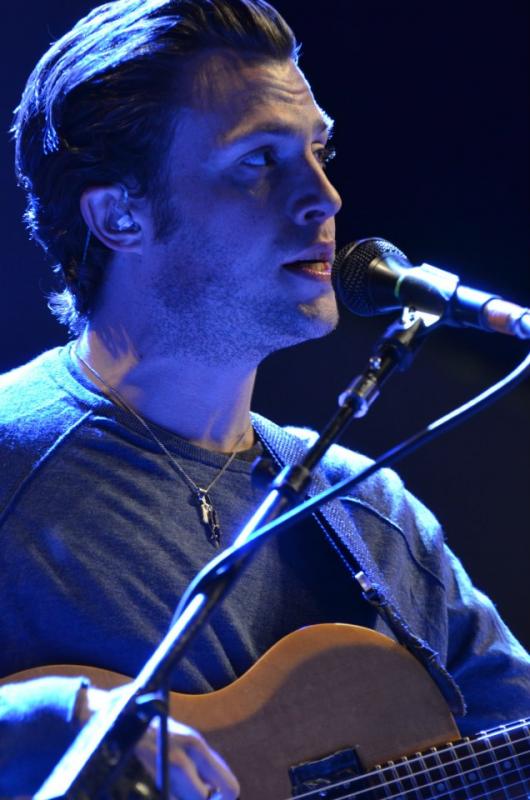 The Maccabees quickly set the tone for the evening by rocking the blue-tinged stage with a loose and driving set of '80s and '90s-influenced rock 'n' roll. The crowd's reaction to its electrifying performance, as people made their way to their seats, certainly suggested that the band is a force with which to be reckoned. Lead guitarist/vocalist Orlando Weeks, guitarists Hugo White and Felix White, bassist Rupert Jarvis and drummer Sam Doyle, along with touring keyboardist Will Whit, delivered a short set chock full of fantastic vocals and catchy melodies.
This was the second night of the group's tour with Florence + The Machine. Weeks went out of his way to point out that the band was happy to be there and that if the show "goes anything like last night, it'll be okay!" The set's highlights were the exceptional versions of "Child," "Feel To Follow," the U2-influenced "William Powers," the heavy bass-driven "No Kind Words," and "Can You Give It," with its military inspired percussion and minor-keyed guitars. As the crowd filed into the outdoor arena by the bay it was soon apparent that The Maccabees really were something special. Each song was greeted with slightly more applause than the previous one, in particular for the closing "Love You Better," with its swirling drums blasts and repetitive musical theme, and the staccato pop of "Pelican."

Based on the high energy performance, precision lightshow, showmanship and stage presence it was easy to see how and why The Maccabees have become one of England's most popular bands. It shouldn't be too long before it achieves similar status on this side of the Atlantic.

After a short intermission, the stage darkened, The Machine took the stage and Florence Welch appeared in silhouette behind a huge, bright screen. When the lights came up, the redheaded singer's long, dark, flowing long-sleeved dress, with its stylish, orange-yellow splotch design, was revealed. The opening performances of "Only If For A Night" and "What The Water Gave Me" were nothing short of sensational.

Welch has a big voice. She can belt out a song with the best of them, filling large and small arenas alike; the album isn't called Lungs without reason. When she spoke, however, she was very soft-spoken. Some have called it gentle, others quiet and still others have described her speaking voice as having an almost waif-like quality. Quite a dichotomy.

Waif-like or not, Welch was clearly in a playful mood, greeting the crowd with, "Hello Jones Beach...what do you call those seats up there, I don't suppose they're called bleachers. We're happy to be here even if we've been calling it Jonas Beach, like The Jonas Brothers Beach House." She then paused for a second and, with a twinkle in her eye, said, "This is much better, anyway thank you for having us!"

Banter is as much a part of a Florence + The Machine show as the music. When introducing "Rabbit Hole (Raise It Up)," Welch asked, "Jones Beach, what are we going to do with you?" She continued by stating that "This is the part of the show where we demand some human sacrifices. We want you on your feet. Those of you in the back can decide if you want to or not, but if you feel like it put your wife, friend or someone you gave birth to on your shoulders. Now you can just rise from your seats. This one's for you; we have successfully subverted the venue. This one's called 'Raise It Up.'" During the song, the barefoot Welch ran through the crowd—up one aisle and down another, with security hot on her tail—all the while singing a perfect note-for-note rendition of the song. 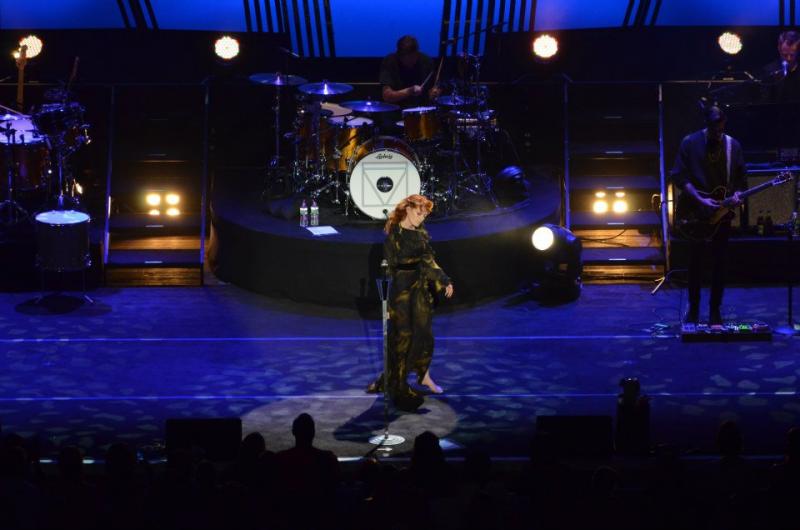 "Spectrum" was introduced with, "I don't know about you all but I'm guessing a lot of you are from New York City. We English are a lot like New Yorkers—a bit reserved." She smiled and continued, "So now I want you to turn to the person next to you and shake their hand, embrace them, kiss them or whatever you want to do—well not whatever...there that was nice. I saw some kissing. Now that we all know each other and we won't be shy." It was the perfect way to introduce a song whose chorus is:

And every color illuminates,

And we'll never be afraid again.

As every color illuminates!

And we'll never be afraid again!

As every color illuminates!

And we'll never be afraid again!"

Clearly enamored with the New York City area, Welch stepped center stage to announce that it was ..."only the second night of our U.S. tour. New York is so alive and vibrant. Do you want to sing this with me?" She then led the audience through a call-and-response version of "Heartlines," with its "Yeah, yeah, yeah" verse.

"Shake It Out" was preceded by another New York story. Clearly making a statement that it truly is ..."always darkest before the dawn," Welch explained that, "My best and worst intoxicated times have been in New York City. I once set fire to my hotel room in The Bowery...this song is for you, New York!" She then sang the song with exuberance, enthusiasm and energy, all the while skipping across the stage. When the song ended, Welch grabbed a pair of drumsticks and pounded out a mini solo/segue into "No Light, No Light." The song was extremely exhilarating. As the set closer it, had its desired effect; the crowd was on its feet. It was a fitting end to a great performance and, as the final notes drifted across the bay, Welch raised her arm and loudly bellowed, "Thank you, good night!" And they were off.

The now empty stage was bathed in blue while the audience begged for the inevitable encore. After a few minutes, the stage came alive with a blinding blast of white light, the band returned to its places, the crowd remained on its feet and Welch led both band and audience through an amazing version of "Breath Of Life" from the Snow White And The Huntsman (Island, 2012) soundtrack. 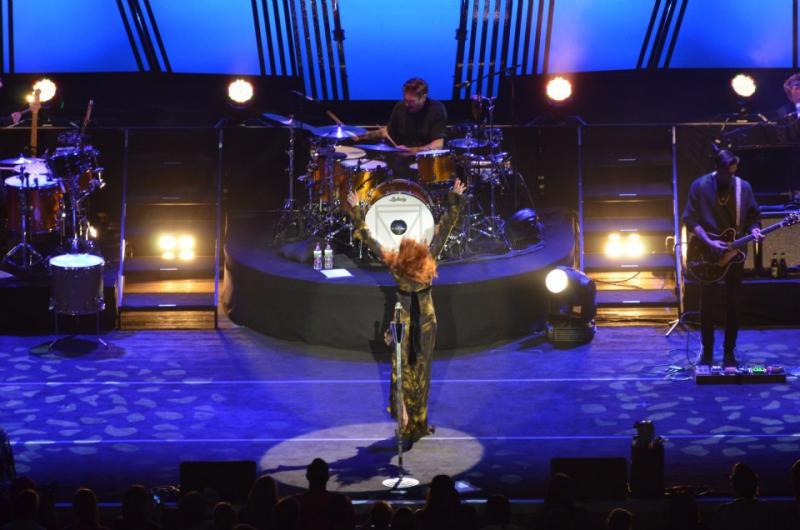 The second encore proved to be even more joyous. Welch began by stating, "Thank you so much Jones Beach. We would also like to hugely thank The Maccabees for coming on this tour with us. They are my favorite band and I get to see them every night. I want to go out and get everything they've ever done." As the opening of "Dog Days Are Over" began, Welch said, "You've been great, and until next time." She then began clapping rhythmically to the beat of the song and, while she sang, continued to run and stalk her way back and forth across the stage.

As the music slowed and the volume dropped in the middle of the song, she stopped and said, "Now, we're all going to do something together, all of us—from the sides to the back to the very top," asking the crowd to do something together or, as she put it, "This is basically the ceremony of the ceremonials tour, so we have to do it and I know you're going to do it well. Shall we practice it together? It goes like this: one...two...three." At that point, Welch jumped as high as she could, then saying, "All together—one...two...three," and jumping again. For emphasis, she did this a third and fourth time, beseeching the audience to participate, "One more time, everybody, front, back side, people in the middle, I'm looking at you—one...two...three. People in the back—one...two...three." Each time she jumped for joy, finally stating, "See, you can definitely do it. Okay there's more. When I shout Jones Beach—that's you—I want you to do that and keep doing it. Jump as high and as long as you can. Are you with me?"

The audience roared its approval and Welch said in an almost timid voice, "Thank you." She turned around and, with her back to the crowd, ascended the drum riser. She then raised her arms as a priestess would during a religious ceremony and slowly, almost theatrically, turned to her right and, with the stage bathed in blue light, jumped, began bouncing up and down while screaming, "one...two...three—Jones Beach!" As the band resumed the song (in all its glory), she ran to and fro, pausing only occasionally to jump, all the while singing. When the eight-minute extended version of the song came to an end, Welch took a bow, said, "Thank you. Good night," waved and departed the stage with the rest of the band.