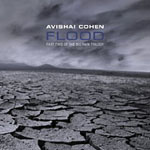 Using accepted standards, what would be the correct instrumental configuration to recreate a disaster of, literally, Biblical proportions? A fairly sizeable orchestra—or, at minimum, a big band with a talent for the chaotic—would seem mandatory. Well, Avishai Cohen (who, among many things, holds down the trumpet chair in the immeasurably talented family band 3 Cohens) chose a different path for Flood. As a result, "Avishai the Trumpeter" has made much more memorable music.

Flood is the second disc in Cohen's Big Rain trilogy. Based on a poem Cohen wrote after Thailand was hit with a deadly tsunami, the trilogy imagines the earth (and society in general) beginning anew after some devastating event ends the world as we know it now. The trilogy's third episode, After the Big Rain (Anzic, 2007), was powered by a crackling sextet featuring Lionel Loueke, Jason Lindner and Omer Avital. Rather than stay with that powerful unit for the flood itself, Cohen pares the group in half. And in this case, less really is more.

Yonatan Avishai's plaintive piano opens "First Drops" with simple, soft chords, evoking a grey day with clouds innocently forming, while Daniel Freedman (the sole holdover from After) adds hints of percussion that suggest rain on a tin roof, and then hits his conga to presage more intensity. A full scene is set before Cohen even plays his first unmated note, which is simple, clear, and rings out like a bell in the night. Freedman's hand drums and the pianist's insistent, percussive playing don't break the feel of this hypnotic waltz, increasingly enticing with each reprise of the opening figure.

With no bassist and Freedman focusing more on texture than foundation, Flood might seem to be a boat with no anchor. On the contrary, this configuration fits perfectly with Cohen's vision of this part of the trilogy, which focuses on the cycles of the sun and moon during the flood. It views the cataclysm without favor or drama. Where the title track would seem to require bombast and upheaval, there is a sorrowful distance about the piece, as good is lost with evil in the pitiless catastrophe.

The real passion is saved for "Cycles: The Sun, the Moon, and the Awakening Earth," as the trio embodies the ever-quickening, always-shifting life cycle returning to reboot the Earth—maybe this time for the better. Freedman's shakers bring a ceremonial feel to "Nature's Dance," traveling to the heart of a tribal plea for the rain to come regardless of the consequences. Each piece is riveting in its own way, as is Cohen's impeccable horn.

Flood is not a party disc, not by a long shot. However, the emotion that fuels Cohen's music is unquestionably genuine, as is his vision of a new, better world. No pun intended, but filtering that concept through a traditional orchestra or big band would have just been, well, overkill.