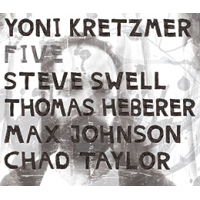 NYC-based Israeli saxophonist Yoni Kretzmer has pulled together a dynamite cast for the debut of his quintet. Kretzmer's thoughtfully arranged compositions engender classic small group free jazz by what comes across as a little big band. It's the sort of session you might have found on the Black Saint label in its heyday, but given a twist of contemporary attitude. Kretzmer makes full use of his crew, not only as adventurous soloists, but also as seasoned ensemble players able to extemporize motifs, indulge in conversational interplay and switch effortlessly between styles and approaches.

In an egalitarian outlook, Kretzmer takes no more space than anyone else, but he leads from the front as he blends blistering overblowing and an urgent vocalized cry with a honeyed core. On trombone downtown stalwart Steve Swell is gruffly mellifluous, and the yell of approval during one irrepressible outpouring is richly deserved. Cornetist Thomas Heberer proves wily and adaptable, bringing to bear all his experience gained from years as part of the celebrated ICP Orchestra.

In demand bassist Max Johnson meshes well with the formidable Chad Taylor on drums, forming a pair capable of morphing in and out of time in accomplished fashion. Nowhere is this better heard than on "Quintet I." As Swell and Kretzmer propound a riff in opposition to Heberer's buzzing throaty cornet exhortation, the rhythmic churn smoothly solidifies into buoyant swing to accompany the leader's marvelous tenor preaching. It sounds great every time.

In a varied program, Kretzmer utilizes a range of gambits, moving from loose polyphony on the dirge-like "July 19" to unisons, vamps and counter melodies elsewhere. In fact he creates different settings for each horn feature, and employs diverse combinations as well. Neat touches become commonplace, like the reed/brass lullaby atop the tumbling drum deluge on "Quintet II," or the cornet/trombone interjections on the surging "Feb 23" which turn into an a cappella duet.

In a change of pace on "For DC," wood flutes, ocarina and chiming exotica introduces Swell in ballad mode, goosed by bursts of rhythm. Johnson's spacious meditative plucked solo full of slurred resonance morphs into an anthemic theme, doubled by cornet, with a glorious supporting obbligato from the other horns. It's a fitting close to a splendid outing.