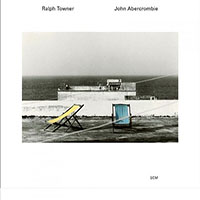 The long overdue release of Ralph Towner and John Abercrombie's Five Years Later, originally released in 1982, may well be the most eagerly anticipated of the Re:Solutions series that brings into print—on CD (four titles for the first time, Five Years Later previously only available for a limited time in Japan), vinyl and high resolution digital formats—seven historic ECM recordings. Add the three Abercrombie Quartet albums recorded immediately prior to Five Years Later—1979's Arcade, 1980's Abercrombie Quartet and 1981's M, planned for release later this year in an Old & New Masters Edition box—and all of these two seminal guitarists' ECM recordings will finally be in print on CD internationally, and not a moment too soon.

When Towner and Abercrombie recorded Sargasso Sea in the spring of 1976, they'd already been friends for several years; Abercrombie, in fact, wrote the well-known waltz from his 1975 ECM debut, Timeless, on the piano in Towner's apartment in 1973, aptly titling it "Ralph's Piano Waltz." Abercrombie credits Towner— already established, by this time, as a stunning multi-instrumentalist and distinctive composer with an instantly recognizable harmonic voice, both solo and with improvising world music progenitor Oregon—with helping him develop his own approach to composition, and by the release of Five Years Later both had evolved into inimitable players, writers and, most importantly, musical partners. Like its predecessor, Five Years Later is split between individual compositions and collective improvisation, though this time a full 23 minutes of the album's 50-minute run time is devoted to spontaneous creation.

The composed music is wonderful, with Towner's knotty but intrinsically lyrical "The Juggler's Etude" one of his most memorable compositions to this day and "Caminata" a miniature of singular melancholic beauty. The contrasting light and dark of Abercrombie's "Child's Play" and more dramatic ebb and flow of "Isla" are further evidence of the guitarist's compositional evolution, in just a few short years.

But it's the free improvisations that reveal just how much Towner and Abercrombie's shared language and innate chemistry had evolved—the result of growth in their own separate projects and with more time spent on the road together. "Late Night Passenger" opens ethereally, with Abercrombie's electric 12-string guitar swells and Towner, on classical guitar, layering melodies that might be of the moment but nevertheless feel preconceived—the sign of two improvisers truly looking to build something from nothing. Building to a first inevitable peak, Towner quickly shifts to a simple but effective preparation device—a matchbook, interlaced in the strings of his guitar near the bridge that makes it buzz—adopting a more percussive and propulsive underpinning to allow Abercrombie to take flight with a lengthy solo that gradually entwines with his partner, leading to a harsher conclusion where, between Towner's buzzing and Abercrombie's scraped strings, the two suddenly...just...stop.

With 32 years having passed since Five Years Later and both guitarists either fast approaching or already passing the seventy-year mark, would it be too much to hope that a third installment might be considered? If not, the collected ninety minutes of Sargasso Sea and Five Years Later remain some of the finest, most intuitive and intimately inspired dual-guitar music in the history of jazz.