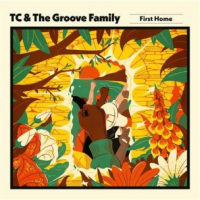 The nine-piece collective TC & The Groove Family are based in the northern English city of Leeds. All but one of the members studied at Leeds College of Music. They play a goodtime mash-up of Afrobeat, jazz, funk, hip hop, dub and samba, reflecting the cultural melting pot which exists in most English cities and which has, to varying degrees, shaped the country's alternative jazz scene.

TC & TGF are at the extreme gumbo end of the English alternative jazz spectrum: jazz is only one of the ingredients and is not the dominant strand. Purists, you have been warned.

Fundamentally, TC & TGF are a dance band, custom made for club dancefloors and summer festivals. They are part of a venerable European multi-cultural tradition whose modern manifestation began in the late 1990s. Two of the movement's pioneers, London's Soothsayers and Barcelona's Ojos de Brujo, formed in 1998. The Barcelona band splintered circa 2011, but Soothsayers are still going strong, still led by their founders, tenor saxophonist Idris Rahman and trumpeter Robin Hopcraft. Aside from TC & TGF, recent additions to the ranks include London's Ezra Collective and another outfit with Leeds roots, Nubiyan Twist.

Nubiyan Twist is produced by Tom Excell, who also produced First Home, which is TC & TGF's debut. Moments of pure jazz are few and far between; trumpeter Grifton Forbes-Amos, a Tomorrow's Warriors alum, delivers a blinder of a solo on "Duende," and baritone saxophonist Hannah-Mae Birtwell intrigues on "Weh Dem A Do" and leaves one wanting more. Most of the time, however, the band does what it says on the can and get-on-your-goodfoot-groove rules.

After two years of dancefloor and festival abstinence, TC & TGF should go down a storm on their extensive June through August British tour.