By DAN BILAWSKY
September 1, 2014
Sign in to view read count 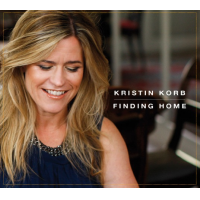 A home isn't just a physical space and a place to hang your hat; a home is wherever an individual finds comfort, acceptance, and personal fulfillment. On Finding Home, bassist-vocalist Kristin Korb explores the journey and process that brought her to such a place in her life.

Korb, who grew up in Montana, found a new home in California a long time ago. She studied at the University of California at San Diego, became a pupil of the late Ray Brown, and eventually set up shop in 2002 in Los Angeles, developing a career as teacher, recording artist, and live performer. But that wasn't meant to be the end of her search for home. Love later walked in and altered the course of Korb's life. In 2011, she packed up her things, said goodbye to L.A., and moved her life to Copenhagen, Denmark.

Through nine original numbers, Finding Home chronicles Korb's move and the emotional highs and lows that come with such a transition. There's sunny, keep-your-head-up enthusiasm in some places ("Something To Celebrate"), and trepidation and self-pitying in others ("58 Boxes"). Along the way, Korb also details the process of learning a new language ("Up Again"), touches on the difficulties and rifts that can come with such a move ("The Letter"), and basks in the thought of taking time to soak in life as she now knows it ("Finding Home").

No single style of music dominates here, as Korb works different musical angles with each song. Sunny swingers ("Something To Celebrate"), ballads ("58 Boxes"), a perky Brazilian-based scenario ("It's Spring"), a wonderfully saucy NOLA-influenced number ("Happy For Me"), and a pop-based piece ("Invisible") are all part of the package. In keeping with the tone and theme of this project, Korb works with a crack crew of Denmark's finest players, many of which are also expatriates. Pianist Magnus Hjorth's versatility is key here, the three horn players—trumpeter Gerard Presencer, tenor saxophonist Karl-Martin Almqvist, and trombonist Steen Nikolaj Hansen—all prove to be strong soloists, and the rest of the band does a fine job capturing the essence of each number. As vocalist and bassist, Korb is solid and engaging throughout, upholding her reputation as one of the great double-threat talents in the jazz world.

Kristin Korb may be living a life she never imagined, but it seems to really suit her. She appears to be loving life now that she's found her true home.

Something To Celebrate; Jeg Elsker Dig (y-eye el-sker d-eye); 58 Boxes; Up Again; It's Spring; The Letter; Happy For Me; Invisible; Finding Home.