BY JIM TRAGESER
November 5, 2016
Sign in to view read count 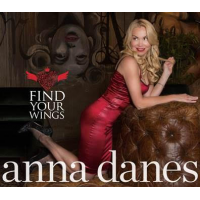 On her 2014 debut, San Diego's Anna Danes came across as what she admittedly was: A woman who only came to singing in her 40s, who had limited training, only a rudimentary grasp of technique and theory—in short, a beginner. The voice was unpolished, the delivery often hesitant, the choice in material suspect for someone aspiring to be a serious jazz musician.

Danes proves herself an adept student of the art, though, on Find Your Wings, her follow-up album.

An exquisite duet with British actor Richard Shelton of "That's All," the smoldering romantic standard, is unlike anything heard on her first release. Her singing voice exhibits a bottom half barely evident previously, her pacing is nearly languid, and she's learned how to caress space as well as notes, to dance atop the band instead of marching alongside it.

She shows herself, in fact, a jazz singer.

While "That's All" alone would be worth obtaining the album to possess, the other 11 songs here are a nice mix of jazz standards and newly written originals. If Danes is still finding her feet as composer, her sometimes uneven originals are still an improvement over some of the pop covers on her first release.

Her interpretations of the Great American Songbook range from standards like "In the Wee Small Hours" (an obvious and lovely homage to the 1970s Tony Bennett-Bill Evans sessions) and "Cry Me a River" (which swings like Anita O'Day in her prime) to lesser known gems like Sammy Cahn's "It's Crazy" (featuring more wonderful interplay between Danes and pianist Rich Ruttenberg).

Of the half-dozen originals that Danes wrote or co-wrote, "The Voice" is the strongest of the bunch, with the most memorable melodic theme—every bit as good as the songs written by more established songwriters Michel Legrand and Janiva Magness.

The backdrop provided by the jazz trio of Rich Ruttenberg (piano), Trey Henry (bass) and John Ferraro (drums) frames every song in its best possible light. It is a serious jazz combo -and one Danes shows she is capable of fronting without fear of exposing herself as the weak link.

For the sake of jazz fans, one hopes that this is merely another step in Danes' growth as singer—that she spends the coming decades continuing to learn, and putting that knowledge to work in the recording studio.

One also hopes the borderline cheesy and definitely embarrassing marketing of Danes' attractiveness on the first two albums—with the slinky dresses and hither come yon flirtation on the covers—goes by the wayside.

Market her voice, her growing artistry, her increasing command of the jazz idiom.

Anything less is an insult to her work.

When You Were My King; I Will Wait for You; It's Crazy; I Want to Be Around / Cry Me A River; Find Your Wings; That's All; Long Distance; In the Wee Small Hours; See You in L.A.; Mr. OMG; The Voice; I Love You.