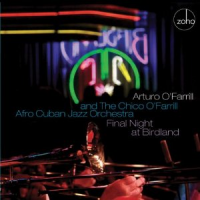 On June 26, 2011, Arturo O'Farrill and the Chico O'Farrill Afro Cuban Jazz Orchestra ended a fifteen-year run at New York City's Birdland, and—to our good fortune—had the foresight to record that very special event for everyone to hear and appreciate. The orchestra's scion, the great Chico O'Farrill, was still living when the ensemble made its debut at Birdland 1997. When he passed away four years later, son Arturo took the reins, guiding the orchestra for more than thirteen years through its regular Sunday evening performances.

On this Final Night, the orchestra plays mostly music either written or arranged by Chico, opening with his three "Afro Cuban Jazz Moods" and continuing through Luis Miguel's even-tempered "Delirio" and Mario Bauza's five-movement "Tanga Suite" (both arranged by Chico) and Chico's rhythmically dynamic "Havana Blues" before crowning the concert with Arturo's "Fathers and Sons, From Havana to New York and Back Again," on which two of the leader's sons—trumpeter Adam and drummer Zachary O'Farrill—carry the banner forward with guest appearances. When an orchestra has been together as long as this one, its members can almost read each other's minds; that is to say, they are not only on the same page but more often the same word or sentence. There are no missteps here, and the crystal-clear recorded sound further enhances the band's dynamism and cohesion.

There's no doubt the orchestra wanted to make its Final Night at Birdland memorable, a goal that was not only reached but, some may argue, surpassed. For those who love Latin and Afro Cuban jazz, it doesn't get much better than this.