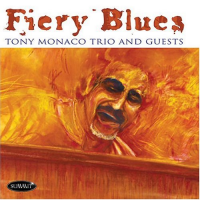 Tony Monaco has grown into a durable and intelligent purveyor of organ jazz. With the release of Fiery Blues, Mr. Monaco may now be considered in the same company and Jimmy Smith, John Patton, Jack McDuff, Shirley Scott, and Larry Young. While closer to Smith than Young in overall philosophy, Monaco does not shy away from the more challenging music (having covered Wayne Shorter, as well as Miles Davis). Fiery Blues is exactly that: a survey of the blues, everything from the gutbucket to the concert stage.

Tony Monaco has five previous recordings to his credit as a leader: Let's Bop , Burnin' Grooves , Master Chops "T," Intimately Live at 5:01 , and New Generation . All have been well received by the listening public. Now, Monaco ascends to the top of the heap with a superb blues recording that draws from everyone from Horace Silver to Don Patterson. Besides his regular trio mates, guitarist Robert Kraut and drummer Louis Tsamous, Monaco adds Tom Carroll and Derek Dicenzo on guitar, Jim Rupp on drums, Gene Walker on saxophones, and the very fine Willie Pooch on vocals.

Monaco gives the old twelve-bars a workout. Opening with Don Patterson's "Goin' to a Meetin'" sends things off at a relaxed clip that heats up quickly. All of the guitarists perform well on the recording. The best guitar performance is on the Monaco original "Ashleen," where Derek DiCenzo weaves his way through every major blues movement in the space of a bit over five minutes. For Monaco's part, his talent and aptitude have increased exponentially since Burnin' Grooves, particularly his bass pedal work, which is superb. While the press kit smacks of hyperbole in saying that "[this] may become one of your favorite jazz and blues recordings...," I suspect it may be right. This music is readily accessible and fun.

Visit Tony Monaco on the web.