BY TROY COLLINS
November 3, 2008
Sign in to view read count 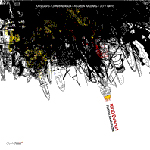 Fiction Avalanche is the debut recording of a formidable young collective, the RIDD Quartet. Pianist Kris Davis, saxophonist Jon Irabagon, bassist Reuben Radding and drummer Jeff Davis are bandleaders at the forefront of a new Brooklyn scene, one which subtly incorporates the vagaries of myriad genres and styles into new avenues for exploration.

Consisting of ten collectively composed tunes, these stylistically cohesive works veer between dulcet sentimentality and unfettered aggression, modulating from one emotional extreme to the other—often in the same piece. The quartet understands the value of restraint however; keen listening and an empathetic rapport embolden their dynamic transitions with a poised focus that many collectives lack.

A singular artist on the rise, Kris Davis's neo-classical aesthetic blurs the line between restless impressionism and aleatoric invention. While turbulent salvoes are unleashed in climactic passages, it is her ability to summon disquieting lyrical fragments that reveals her true talent. Her euphonious refrains on "Paoli" are sublime, but it is the tortuous filigrees on "Sky Circles" and "Blue Cry," alternating between atonal patterning and poetic introspection, that are most striking.

As a key member of bassist Moppa Elliott's Mostly Other People Do The Killing, Jon Irabagon embraces every aspect of the tradition, from featherweight balladry to coruscating skronk. A sonic extremist, his capacity for transposing dissonant multiphonics and undulating overtones into tuneful phrases is demonstrated on "Sky Circles" and the vociferous "Monkey Catcher." His keening cries yield strangely appealing harmonies when combined with Davis' tinkling, harpsichord-like note clusters on pieces like "The Five Ways."

Resounding with fragments of bittersweet melancholy and mellifluous lyricism, punctuated by escalating thickets of caterwauling noise, Fiction Avalanche is an emotionally intense and dynamically varied document from the next generation.