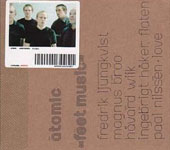 Named after an Ornette composition, Feet Music is the debut album from Atomic , and is the exception to the Jazzland rule in that it lacks the distinctive beats and rhythms of Oslo Nu-jazz. (Maybe this is why it is released on the Jazzland Acoustic imprint.) Atomic are an acoustic quintet with a classic sax/trumpet/rhythm-section line-up and no added frills, yet their music is completely at home on Jazzland, having the energy and air of challenge that is the house style.

It is easier to define their music by what it isn't rather than by what it is. It isn't "European" if one interprets that adjective as synonymous with cool, ECM-style detachment. (Yet it is unmistakably European in its openness and willingness to question accepted norms.) It isn't free jazz, despite the nod to Ornette. (However, it exists because free jazz happened, and it draws upon it. If one were to need a label, "post-free" would best describe this music.)

Atomic grew out of the group Element that was a conscious reaction to the ECM school, playing high-energy Coltrane-inspired music. The Atomic rhythm-section came from Element, and is a formidable unit; they are highly attuned and responsive to each other and to the horns, able to generate a groove that is loose yet funky. They act as a launch pad for soloing not a strait jacket. Throughout, the solos never outstay their welcome; they are focussed and compelling.

This is an album that passes the "instant replay test"; as soon as its fifty-five minutes are over, you want to hear it again. A stunning first album. Debut of the year?