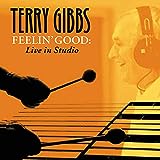 On paper, Terry Gibbs' Feelin' Good looks like a can't miss proposition. Featuring an assortment of great players, including the inestimable Joey DeFrancesco on Hammond B3 organ, and a collection of great songs, where could it go wrong?

To get to the point, nothing went wrong—the disc is as enjoyable as albums come. Just because the disc is predictably successful shouldn't take away from the fact that there is no guarantee it would work out that way. The musicians did, after all, have to show up and play.

The band steamrolls through "St. Louis Blues, with Gibbs liberally sprinkling his vibraphones over the galloping rhythm. Elsewhere, DeFrancesco applies sympathetic washes of sound on a bluesy "What's New. Guitarist Don Faehnle contributes a rousing solo to the gospel rave "Smoke 'Em Up.

Feelin' Good is a great, soulful record. At eighty years of age, Gibbs plays the vibes like a man less than half his age, and the band seems energized by his vibrancy. It is rare indeed when things turn out to be just as good as you expect them to be, and this record more than meets any lofty expectations.

Smoke 'Em Up; Things Ain't What They Used To Be; Misty; This Masquerade; And That's Why It's Called The Blues; St. Louis Blues; Wave; Waltz Rubiot; Hey Jim; What's New; Sugar; Hot Rod.