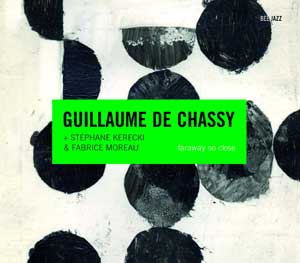 Faraway So Close is a trio offering from pianist Guillaume de Chassy, whose previous recording, Piano Solo (Bee Jazz, 2007), was completely engrossing in its trenchant beauty. This album projects the same depth, sincerity and directness of communication as the former one, but in a trio setting.

Music is mysterious in the manner in which its affects are felt. The piano, with its mechanical action, adds a further layer to the puzzle, as Jon Balke made clear on Book of Velocities (ECM, 2008). De Chassy's keyboard touch is remarkable for its liquid clarity and supports his seeming endless supply of ideas, both melodic and harmonic.

Comparisons can be a cheap way out of the problem of describing music in words, but de Chassy's sound is reminiscent of Michel Petrucciani, in the humanity present in each note, even if the intensity of its presentation is more on the cerebral side. Both players captivate by allowing the music to flow through them. The player becomes, in a sense, transparent and the music feels completely natural as its spell is woven.

Despite its rather short length of just over forty-one minutes, Faraway So Close feels very deep and wide as it takes its time unfolding. The deliberateness of de Chassy's approach has much to do with this effect, although the music never sounds over-intellectualized or prepared. The pianist sounds as if he's sipping from a deep well of musical experience, and is merely channeling its vastness. Closer listening reveals many telling details of harmony and melodic phrase that both surprise and bring a knowing nod in their perfect placement.

The program has a distinctly classical flavor which comes from de Chassy's own compositions (including "Parenthese," which appeared on the Piano Solo), but also in the treatment of Pink Floyd's "Wish You Were Here." Nothing is rushed, and the song's harmonies are enriched without losing their original directness. Even the bass line of the bridge, which could easily have dragged the piece down, is lightened and sweetened. Carla Bley's "Ido Lupino" is a fine choice because its construction is typical of her use of simplicity that still allows for infinite possibilities.