Divergence Jazz Orchestra: Fake It Until You Make It 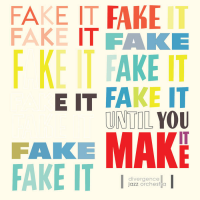 Fake It Until You Make It is the second recording by Australia's young and ebullient Divergence Jazz Orchestra, ably co-supervised by composer / arranger Jenna Cave and trombonist Paul Weber (our apology to Weber for not having named him as such in a review of the orchestra's debut album, The Opening Statement). The DJO was formed four years ago (2012) by Cave and Weber "to provide a space where composers and musicians could come together, explore ideas and make music." It carries out that purpose on Fake It, as it did on its earlier recording, by presenting eleven compositions (including half a dozen by Cave) inscribed by Ozzies, all but one of whom are members of the DJO. The lone exception is "Peace Please," written by one of Cave's mentors, Miroslav Bukovsky.

The album opens with trombonist Luke Davis' "On Horseback," which may best be described as "interesting." Michael William Gilbert's lyrical trumpet predominates, weaving its way through a backdrop whose tempos and dynamics are reminiscent at times of Spanish flamenco. Cave's six tunes follow, commencing with the groovy "For Miro," which nods toward the great Sammy Nestico and the Count Basie sound with suitably laid-back solos by trumpeter Paul Meo and pianist Andrew Scott. "A Fantastic Epic (Lessons in Jazz)" is simply lovely, establishing a congenial framework for tenor saxophonist David Reglar and trumpeter Will Endicott, as does the funky "Mrs. Party Pants" for trombonists Weber and Brendan Champion and guitarist Luke Liang. Cave's shapely ballad, "Now My Sun Can Shine Again," opens on a melancholy note and ends with hope, epitomized by pianist Scott's heartening solo.

Cave's "Twerking It Nyabs Style" shuffles implacably forward to a New Orleans-centered beat, earnestly reinforced by Tim Clarkson's baritone sax and Rob Campbell's trumpet, while her colorful "One Woman's Day of Triumph" exudes gladness to reinforce luminous solos by Clarkson and Liang. Champion's "Tones" is yet another persistent groover, enhanced by tenor Louis Klaassen and alto Justin Buckingham, while trumpeter Paul Murchison's "Trinity" is a fast-paced jazz waltz whose soloists are Buckingham, Liang and drummer James McCaffrey (who anchors the orchestra's responsive rhythm section). Bukovsky's "Peace Please," described by Cave (who arranged it) as a "gospel ballad," leads to the dynamic finale, Champion's "Fake It," on which the ensemble proves, as it does throughout, that faking isn't a part of its lexicon. In other words, the DJO is for real.

Our review of the orchestra's Opening Statement ended with a wish to hear what Cave and the orchestra might choose to say next. Well, that second manifesto is now here, and the verdict is that it is in many ways even more impressive than the first. Of course, that is one reviewer's opinion. Listen and decide for yourself.

On Horseback; For Miro; Fantastical Epic (Lessons in Jazz); Mrs. Party Pants; Now, My Sun Can Shine Again; Twerking It Nyabs Styel; One Woman’s Day of Triumph; Tones; Trinity; Peace Please; Fake It Until You Make It.

Title: Fake It Until You Make It | Year Released: 2016 | Record Label: Self Produced